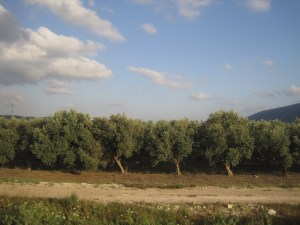 It happens to me everywhere I go, no matter what I mean to do. Somehow, the very presence of farms draws my attention from anything else. My first visit to agricultural production in the Mediterranean was by car with a dear friend who was showing me around Turkey. The bazillion questions I asked him and the answers I was given, were top of mind as our bus headed north from Tel Aviv into Israel’s Coastal Plains.

As our tour guide talked, I had to think at least briefly that the coastal plains seemed familiar even though I’d not been there previously. The topography of the Coastal Plains in the Southeastern US has been a frequent part of my travel, both for work as I look at cotton in South Georgia and as I meet up with family for vacation in Edisto Beach, South Carolina. Its just that olive trees don’t grow there like they do along the Mediteranean, so maybe it was a bit more like Turkey. But as we drove along, I tried to snap photos of all the crops, but must admit many are blurred since we were traveling highway speeds. There were lots of crops – citrus fruits, bananas, wheat, cattle, grapes, hay and more! 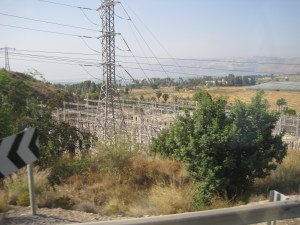 irrigation pumping station near the Sea of Galilee

In these areas, farmers have a number of options available to them. Given the climate, they tend to be rainfed during the winter months which can be warm enough to produce some crops. And one of the most advanced irrigation systems in the world provides water for crops in Israel. The water tends to be pumped from the fresh water Sea of Galilee and goes into surface or drip irrigation systems which closely regulate the amount of water used.

As spring comes to a close in Israel, most crops are being harvested in order to leave ground fallow during the scorching summer heat. We saw ripe olives, combines taking to wheat fields and swathers & balers in hay fields and fruit nearing harvest in several places.

Following is a slide show of some of the photos I took along the roads from Tel Aviv to Haifa and on to Tiberias as well as around the Galilee region.

I’ve already posted a few other blog posts about the trip to Israel and have more coming in the next week!