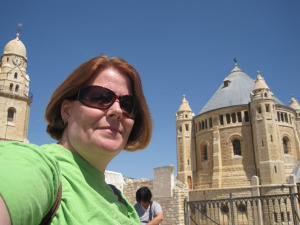 Everyday in Israel we saw fairly incredible places and most, if not all, related to the Bible in one way or another. But narrowing that list down to 20 sites that really grabbed my attention may be hard and I have to say before I even start that prioritizing the list will likely prove impossible so I won’t even bother. I mean what would make it the top place? What happened there, how moved I was by the location, how much work it took to get there,the importance it played in my development of faith or simply whether a much needed cool breeze blew there? There were so many times where I was reminded of days spent in Sunday school, vacation Bible school or church camp…. and passages from the Bible and songs about the stories from these places ran through my head like an unwitting soundtrack.

One thing I feel I should explain up front, if something of Biblical importance happened somewhere…. a church has been built there it seems. The churches ranged from those of great splendor to those of simplistic beauty. All provided quiet time for reflection with many having beautiful gardens to enjoy as well.

It is a challenging thought to narrow it down to some of the religious sites that would be at the top of the list. But I am going to try and give it my best shot.

I’m sure I’ve missed some things, misspelled some things or something, but I wanted to give you a good feel for what we saw and did. To do that, I’ve compiled a slide show of photos of all the locations listed above. You may want to get a cup of tea or coffee before it starts though…. I got a little carried away on the photos. Okay, I got really carried away on the photos! Next time, I’ll try to think ahead & put it to music or something!  🙂
[slideshow]

Other posts from the trip to Israel include:

This blog is part of the communications efforts by JPlovesCOTTON LLC.
5 shares