Chicken tortilla soup is something I find myself ordering time and time again in restaurants. I love it. The flavors and textures come together and I smile from ear to ear. finally I decided to try to make some, but as usual, I didn’t use a recipe. I bought chicken breasts without a plan or knowing how it would turn out.

It was fantastic! I was so excited about the smell that filled my home as I released the pressure on the instant pot that I snapped photos. I know, this is far from a food blog, though I routinely talk about food. 🙂  But I do like to cook now and then and . (Red beans and rice has definitely gotten mindshare recently.)

When I shared the photos of this soup, I got so many rave comments and questions that I wrote down what I did and shared with friends and family sharing what I threw together on a whim. It is a bit of a spin on the taco soup my mom makes. 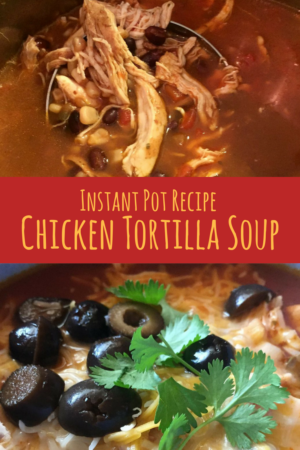 Here’s what I use:

Turn off saute mode. Put a bit of broth in to get the stuff that stuck free from the bottom of the pot.

Add in all the canned goods — Rotel, tomato sauce, black beans, hominy then put some taco seasoning in. Put the chicken breasts ontop (Schnucks had seasoned chicken on sale so it was already seasoned too so I held back on some of the seasoning.) Then poured in more broth til the chicken was covered.

Lock the top and use the meat/stew setting, reducing the time to 16 minutes. It was a total guess but when I released the pressure and then pull them out to shed the chicken, they were clearly cooked through.

As I served it, I put cheese, cilantro and olives on top. My avocado wasn’t quite ripe so it was used atop the leftovers the next day.

0 shares
« Be That Aunt or Uncle…. Not Just to Your Siblings’ Kids
Holiday Gifts Straight from the Farm! »