In the past week I have heard far more about Golden Rice than I had imagined I would. I first read of the vandalism of a test plot of Golden Rice in the most ironic of ways… I saw the news of it tweeted by Toby Bruce, one of the researchers at Rothamsted.

Sorry to hear of @RiceResearch golden rice trial vandalism. Not an intelligent way to decide matters.

So, in case that first paragraph has you wondering what I am talking about, let me step back with a few quick definitions. 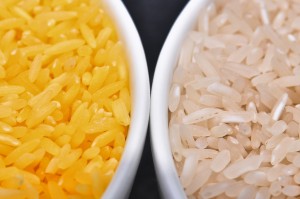 Shared through Creative Commons thanks to IRRI Images on Flickr

What is Golden Rice?

Golden Rice is have a crop that has been tested several years. The scientists behind it found a way through biotechnology to get betacarotene in rice resulting in adding vitamin A to diets. The scientists goal? It could be helpful for many people in the world who have diets that are heavily dependent on rice and due to a lack of vitamin A in their diets. This lack of vitamin A causes blindness and at times, death.

Why would vandals destroy rice?

Golden Rice is a GMO crop (a post I wrote on that general topic) and that, in and of itself, makes it controversial for some and the polarization of the discussion around GMOs just keeps growing. The controversy has been on-going for quite some time for Golden Rice — it appears that it has been in research since 1999.

This research was being done under specific legal conditions and although I understand how passionately some detest biotechnology, but this research has been funded by public and charitable efforts. As I’ve read descriptions, I wonder if people who don’t like GMOs feel people who have embraced Golden Rice are overstating things. I also have to wonder if some people involved are naive, but have to think other benefit from the polarization & fan the flames with misinformation.

Why wouldn’t I do it? 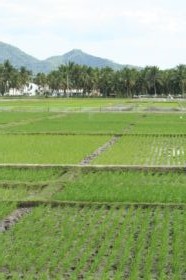 First off, vandalism is wrong. It’s illegal and in this case, well, I would suggest immoral too. But I also have a direct connection. A personal one.

When I was in The Philippines a few years ago on vacation, friends and I agnerded it up and actually spent a day at the International Rice Research Institute (IRRI), the institution developing Golden Rice. (I especially love that I knew exactly how to find a photo for this post thanks to the conversation I had with IRRI’s communications team on how they can store extensive data through free online services.) I also visited the university’s public breeding efforts in Los Banos since my friend Albert had studied there before coming to the US.

I was captivated by the passion the team in Los Banos has for improving things for farmers in rural areas of Asia, Africa, etc who rely on meager rice harvests to keep their families alive. Golden Rice is just one of many projects they have going on.

Since I’m a supporter, I want to say, I think it is simply one way to help solve the issue. I would love to find ways for more people to get more diversified diets too. I think there are lots of other sources of betacarotene & vitamin A that aren’t accessible to the families going blind. We should certainly be looking at other options as well. And no, I don’t think this rice won’t save everyone’s eyesight. It’s a step in the right direction is all. And yes, if this crop went through all of the regulatory hurdles the US has in place, I would eat it and serve it to the children in my family, especially if I thought they weren’t getting enough vitamin a! Of course, the scales of understanding are totally different hear as young children go to eye doctors when vision doesn’t appear to be 20-20. The people who need this rice don’t have access to those facilities. We are truly blessed here.

Why is hearing about it from Toby Bruce ironic?

In early May 2012, I had no idea who Toby Bruce was, nor had I ever heard of Rothamsted Research (if I had, I promptly had forgotten it). But when vandals threatened to destroy a biotech wheat trial, he and other researchers took to social media. The video making a plea to let their GM research continue grabbed my attention and I began following him on Twitter.

Now, based on a tweet of his and following IRRI’s communications more closely, I wonder if I will be getting to know Bruce Tolentino…. this video was among the pieces IRRI shared with a Sunday post titled “Visit to vandalized Golden Rice field trial.”

Sorry I have meandered around this topic. But I kind of thought I needed to talk it through a little and I hope it’s ok that I chose to do it here instead of on the phone with a friend. Then after all of that, I find my friend Val Wagner has also been thinking about bioterrorists.

If you agree that vandalism is out of bounds, please sign on to the change.org petition condemning the destruction of golden rice.