In the past few months, I have seen several mainstream ads that receive a lot of attention based on their characterizations of food and farming. Seems everyone is marketing food, no matter what they actually sell. The ads have covered the spectrum — from the appreciation of Paul Harvey piece on “God Made a Farmer” and Culver’s “Thank you farmers” to ads which some farmers felt created negative perceptions from a Panera and the newest Chipotle video.

Those ads have all been discussed fairly, but there is an ad that keeps coming on & capturing my attention. I wonder if others have seen it because I haven’t heard people talking about it at all. Here you go.

Ad for Volkswagen or an Organic Market ?

So see, that ad draws my attention maybe more than it does for some people due to a simple fact. I’m a VW fan. I have had three Volkswagens in my driving history, starting with a beloved 1970s super beetle. There was also a Jetta several years ago and of course, you’ve all seen my current car in photos from my recent roadtrip, but let me show you another photo, just cause I love it. Besides, I wonder if VW ad folks find this, they may want to get the photo for a future ad. (I’ll be glad to negotiate! 🙂 ) 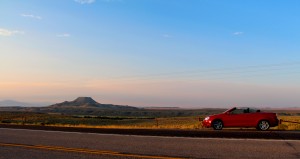 In the past as I watched their ads, I would get a laugh or see a new feature or maybe even be inspired to take a roadtrip. But to me, the new ad feels like a shift. I know, the guy highlights some features but it feels like Volkswagen thinks its better than other cars (which I would sometimes agree too in styling or whatever, but there are equally great cars out there). The ad just doesn’t make me feel good about the product as much as feeling judged, like the “bag boy” from the nameless organic market judges the people for the car they drive. And it also makes me wonder does VW have sales guys like that or maybe he’s a VW fan that judges other folks? Either way, that’s not who I am.

I am guessing it is supposed to be funny with the guy looking at his name tag on the stolen apron (right next to the VW logo), but I just don’t get it. Am I just missing the joke?

0 shares
« My Great American Roadtrip — Day 2 Nebraska including the State Fair (Video)
I Think These Girls Love Cotton Too! »