I was finishing up #BlogChat tonight and I had to drop out. Why? The conversation was great and there was an incredible crowd. HOWEVER, having a second video salute farmers during the Super Bowl was just too much for me to take! The ad that pushed me over the edge?

“So God Made a Farmer” Ad

Dodge Trucks new ad to the classic poem read by Paul Harvey “So God Made the Farmer.”  I have always loved it and have seen several people put various images to the words, but the visuals fit the words so incredibly…. as I watched it though, I saw the faces of farmers I knew in the mix. Here’s the ad, I’ll put the text of the poem below.

And on the eighth day, God looked down on his planned paradise and said, “I need a caretaker.” So God made a farmer.

God said, “I need somebody willing to get up before dawn, milk cows, work all day in the field, milk cows again, eat supper, then go to town and stay past midnight at a meeting of the township board.” So God made a farmer.

“I need somebody with arms strong enough to wrestle a calf and yet gentle enough to cradle his own grandchild. Somebody to call hogs, tame cantankerous machinery, come home hungry, have to wait for lunch until his wife’s done feeding visiting ladies, then tell the ladies to be sure to come back real soon and mean it.” So God made a farmer.

God said, “I need somebody willing to sit up all night with a newborn colt and watch it die, then dry his eyes and say,’Maybe next year,’ I need somebody who can shape an ax handle from an ash tree, shoe a horse, who can fix a harness with hay wire, feed sacks and shoe scraps.  Who, during planting time and harvest season will finish his 40-hour week by Tuesday noon and then, paining from tractor back, up in another 72 hours.” So God made the farmer.

God had to have somebody willing to ride the ruts at double speed to get the hay in ahead of the rain clouds and yet stop in mid-field and race to help when he sees the first smoke from a neighbor’s place. So God made a farmer.

God said, “I need somebody strong enough to clear trees and heave bales, yet gentle enough to help a newborn calf begin to suckle and tend the pink-comb pullets, who will stop his mower in an instant to avoid the nest of meadowlarks.”

It had to be somebody who’d plow deep and straight and not cut corners. Somebody to seed, weed, feed, breed, brake, disk, plow, plant, strain the milk, replenish the self-feeder and finish a hard week’s work with an eight mile drive to church.  Somebody who’d bale a family together with the soft, strong bonds of sharing, who would laugh, and then sigh and then reply with smiling eyes when his family says that they are proud of what Dad does. “So God made a farmer.”

The ad was barely over before I got the first text message asking if I’d seen it. Had to confess I was Googling for the link already! 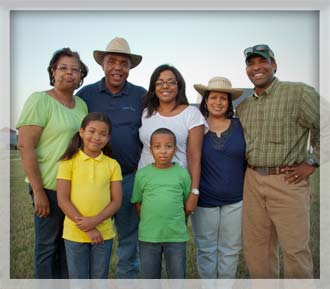 Just a few minutes earlier, I had seen an America’s Farmers ad run. I have to admit, I am not sure which one it is. I just know I saw PJ Haynie on the screen. I have had the chance to talk with PJ a few times. His family farms in Virginia — they grow corn, soybeans, wheat and barley. The Haynies are featured in several of the America’s Farmers ads that my office — Monsanto — runs.

PJ Haynie can’t help but feel a sense of awe when he’s in the tractor, working the same land his great grandfather worked with just a mule and plow.

The Haynie farm is a family farm, through and through, and it’s a farm that has continued to grow, with each generation adding onto it. Today, the farm, a couple thousand acres large, grows corn, soybeans, wheat and barley, and the Haynies manage the farm as a family. For the Haynies, farming isn’t a job, it’s a way of life.

via Americas Farmers ~ Meet the Haynies.

So God Made a Potato Farmer

After I posted this, My friend Emily reminded me that her farm produced a video with the same reading this winter. Love it!