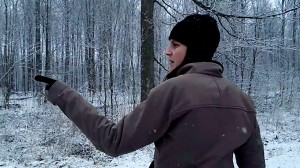 Most of us laugh a bit when Will Ferrell’s character in “Elf” proclaims maple syrup as one of the four food groups. But then again, most people think syrup is a required part of breakfast involving pancakes, waffles or French toast. And even though I knew the difference between some of the syrup used and maple syrup, and even though I knew maple syrup came from trees, I loved seeing how maple syrup is made during a brief trip to SwissLane Farms, near Grand Rapids, Michigan in February. Here are some of my photos from my second dairy farm visit!

My friend Annie Link (@DairyDiscovery on Twitter, who was at AFBF11 & GLRDC11) and her friend Jenna spent the day showing me around the farm and although the maple syrup part was at the end of our day, I was delayed posting it thanks to a crazy schedule & wanting to be sure I got it right. Every time I see breakfast foods, I think about Annie’s maple syrup…. real homemade maple syrup!

Going to “the Sugar Shack” 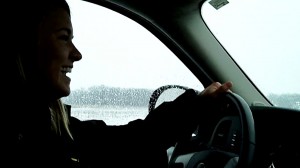 driving across a muddy field

We left the barn headed to meet up with Jerry (Annie’s husband) and a bunch of Annie’s other family members. They were out by the “sugar shack” getting things ready to make maple syrup. Although it was pretty cold, the ground was really soft so we had an adventure as Jenna had to drive across a corn field with some slipping & sliding on the way. One of Annie’s uncles greeted us as we came up to the shack, wondering what we were up to. And then Annie explained what happened in the sugar shack.

As you can see & hear in the in the video, there are several steps to making maple syrup. And she gives us an overview of the process in the building and then we go to the woods. I would have cut off the video since it is a bit shaky, but I thought it was so beautiful, so ideally picturesque, that I had to keep it going! 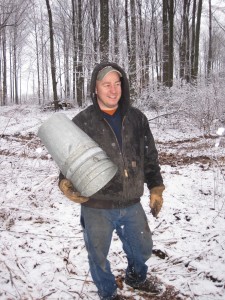 Jerry with an arm full of buckets for maple sap

Placing Buckets to be Ready When the Sap Runs

This is what the Oesch family was ding the day I was at the farm. They had a tractor pulling a wagon load of buckets through an area that over time they had cultivated maple trees in and eliminated some of the others. Having more maple trees seems important when you have a big family as well as the opportunity to sell some!

The tractor was moving through the woods slowly and each of the people following it, including Jerry, would grab a stack of buckets, walk out placing them and come back for more.

Tap the Trees & Gather the Sap

Annie’s family gathers 1,500 or so buckets of sap each year for their syrup making.With that amount, they have invested in a tank where the sap is collected throughout the sap run to be ready for cooking. Sap runs when its freezing at night and warm during the day. 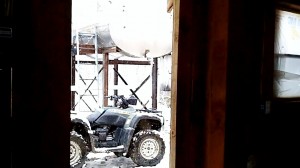 Cook the Water Out

Cooking the sap reduces the amount as it concentrates the sugar. Annie describes the sap as a type of sugar water. The family gets together in the “sugar shack” as people continue gathering the sap, others work on cooking it down and still more keep meals going for all the workers!

As the sap cooks in the evaporator, the thicker part works its way through a series of channels raising the temperature & getting it more concentrated. 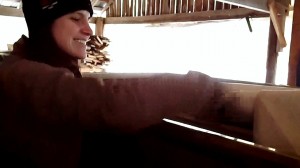 Annie shows how maple syrup is cooking down from sap

It takes 40-50 gallons of sap to make one gallon of syrup!

When the temperature raises to 219 degrees, the syrup is ready and is placed in jugs! She says the smell of maple syrup cooking is incredible! The amount made varies a lot based on the weather and this year’s winter turned to really warm spring so the three week process yielded 275 gallons, that’s a lot smaller than the record year that included another 1,000 gallons!

The setup the Oesch family has is fairly elaborate but Annie says they’ve — well, Jerry has — made syrup in their back yard! It’s a dirty job making maple syrup between all the mud and sap, clothes and the house take a beating.

Annie’s written a few posts about their syrup making:

Want more fresh from the farm breakfast ideas? Check out: 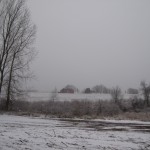 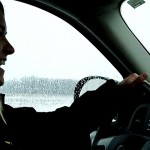 driving across a muddy field 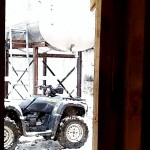 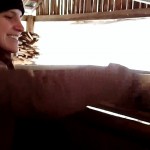 Annie shows how maple syrup is cooking down from sap 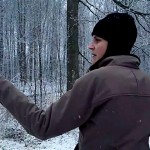 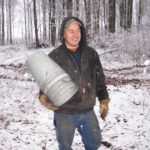 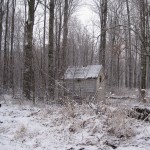 a shack in the Michigan Woods 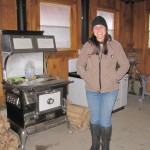 the stove for meals made in the sugar shack 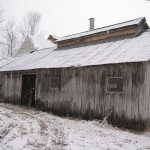 lots of things to store in maple syrup making 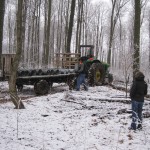 putting buckets out for tapping 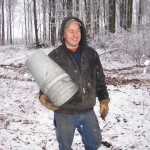 Jerry with an arm full of buckets for maple sap 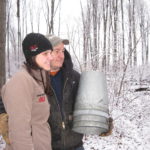 Annie & Jerry getting a photo taken 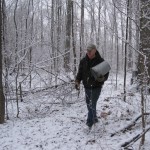 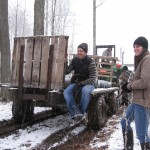 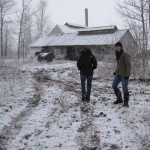 Headed to the sugar shack 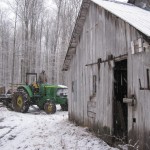 coming back in to the sugar shack