Have you gotten the latest addiction yet? This is a new drug, one that can make you laugh until you hurt and challenges you creatively. Its also gone viral because its connected to iPhones, iPads. Its a game called DrawSomething.  I got turned onto it when I was in Nashville a month or so ago for the Commodity Classic – my cousins Lisa and Laura were in full blown addiction and lured me right in!

Let me explain DrawSomething to you in case you haven’t hear of it yet. It is sort of like Pictionary. You are given three words that range in difficulty to draw/guess and then draw it for a friend. you hit send and the image is sent to the friend you are playing (or the stranger you pick if you prefer) for them to guess. They are given letters to make words of what it could be and start guessing as they watch you draw out the image. That in and of itself can be hysterical – especially when you have shared stories that make you laugh with the person who’s drawing! When they guess, its their turn to pick a word and draw. 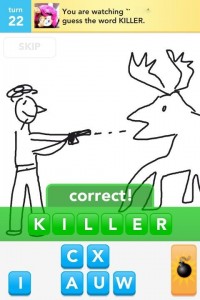 It didn’t take long til I had games going with them and some other friends but my big mistake was posting my new-found addiction to my Facebook page. Not only did I find a lot more people to play with, but I encouraged others to find the new addiction. (Sorry if I sucked you in.) But posting it on Facebook also got me what could be one of the funniest admissions from a friend — he sent me this photo of something he drew for a friend. Its had him laughing ever since. Luckily she guessed it! No doubt, she didn’t want the streak of turns to come to an end!

I have had a problem with DrawSomething and it led me to detox for a few days. Not just to prove to myself I could do it, but because I had run out of space on my iPad! Seriously. I am blown away by that. Anyway, I have had a few days break and am in the process of getting the too many photos pulled off, maybe cut down on some of the music there too. One thing that will not be changing though? I will not take the DrawSomething app off the iPad. This is going to be fun for a good while longer. Whether playing with really artistic friends or folks who (like me) draw stick figures most of the time!

Have you played the game yet? If you’ve never hurt yourself laughing from a game on your phone, this may do it. I mean you could find a friend who draws a deer getting shot in the mouth…. I’m assuming that’s a Pez dispenser the guy has loaded and aimed. 🙂

0 shares
« Discovering the Dairy at SwissLane Farms in Michigan
VIDEO: How To Make Maple Syrup & Other Breakfast Ideas »