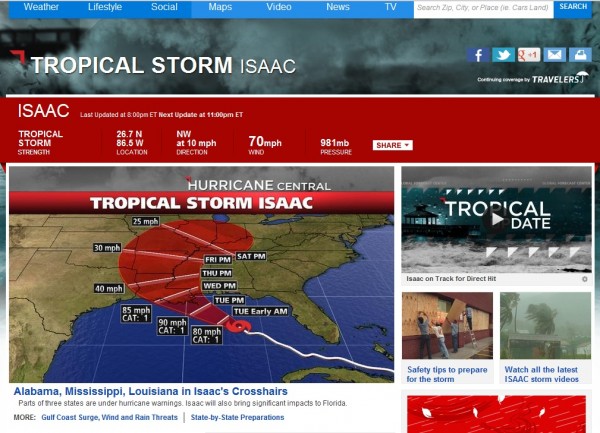 It is really hard for those of us from farming communities in the Mid-South to talk about what’s happening this week as the nation watches Hurricane Isaac set its course on a path that takes aim on New Orleans. There are a couple of big reasons you won’t hear much from farmers publicly tonight. The biggest is the need to get things done rather than talk about it.

We all remember the last fall a big storm struck the same area. Most of us have dear friends who’s lives were forever changed by Hurricane Katrina and if your farm was spared by it, chances are Rita delivered some low punches a little bit later. It was a tough hurricane season for the Mid-South.

If you look at the latest tracking, it looks like Hurricane Isaac is headed right to New Orleans. I have friends who were on vacation when the warnings and evacuations were ordered so they weren’t home anyway. I had other friends in the area who would ride out the storm working in the hospital. But I mostly remember what was happening with farmers.

But the reality is every year there is the potential for hurricanes to impact the Mid-South and Southeast and in fact having one or two is fairly normal. Sure the Weather Channel and TV reporters are pointing to the similarities in the path, but as of today, the storm’s severity doesn’t seem too similar. So farmers are staying focused on getting the work done and leaving the hype building to the folks on TV.

Preparing for a Hurricane’s Landfall

Hurricanes are one of the “acts of God” that you get a bit more warning for than some others. For folks in the city, that means organizing your valuables & critical paperwork as well as boarding up windows, etc. On the farm it means prioritizing fields that need to be harvested sooner rather than later. And if you have crops that can be harvested, you do everything in your power to do just that before the storm hits. 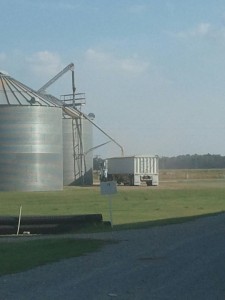 So right now, a lot of farmers in the South don’t have time to chat. They have a lot of work to do and will be doing it until the storm reaches them. They are cutting rice and sugarcane, working with their livestock too. Dairyman Will Gilmer in Alabama talked about what’s happening on his farm in a post today including storm watch, writing:

While we’re keeping a close eye on the maternity pasture, we’re also paying close attention to weather forecasts associated with soon-to-be Hurricane Isaac. Based on the current projections, it looks like the storm will be far enough west of us not to worry about any damage, but the rain associated with is a real issue. Our silage corn is ready to chop, and with a little luck we could be in the field harvesting sometime tomorrow…COULD be in the field. If mid-week looks to be a washout, there’s really no point in trying to chop for a day with the expectation that we wouldn’t be able to harvest again until next week. I have yet to see any rain forecasts agree on when we should expect it and how much we should expect to get, so our planning is currently stuck in neutral. Hopefully we’ll have a clearer picture by tomorrow morning.

In closing, I’d like to ask that you continue to keep all of our country’s farmers and ranchers in your prayers. Unfavorable weather, economics, politics, etc. have made it a difficult year for many, many farm families across America, and your support is needed and appreciated now as much as ever.

Robert Duncan was one of the farmers working to get his crop in well into the evening Monday. He shared a few photos, including the one at right and said “Quarter till 9 and we got about 175 acres to try an get out before the rain. As long as we can keep trucks and the dew don’t get to bad we’ll keep a rollin’. Good luck to all the Delta farmers.” 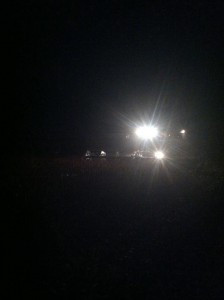 I was already trying to get my thoughts together on this post and asked if it was okay for me to use his photos and the photos of some other farmers. Just an hour and a half later or so, he let us know he had to call it a night early though, saying, “Well. A small dust fire on the manifold shut us down a little sooner than we wanted but we’re just happy we got it put out before it did any damage. Get her good and cleaned up in the mornin’ for a hard day tomorrow.”

What can happen to crops that stay in the field?

You really can’t be sure, and while the storm may or may not be severe, with unknown risks, farmers will play it safe if they can. The biggest problems from a hurricane are probably put into a few big categories:

What can you do?

I think the biggest thing most of us can do is just seek to understand some of the problems that can be faced by those incredible men and women who grow our food and fiber. It’s like other jobs, it can be stressful at times and in years where you face drought, stress is a common occurrence. If you take a little bit of that understanding with you to the store, it may help too as it’s likely that this year’s severe weather will cause supplies to tighten and that may lead to higher prices. Since Americans spend just 9.5% on food, the lowest percentage in the world, we may have to be patient on rising food costs.

And as you see from the words of several farmers above, you can add your prayers to theirs if you are a religious person, and if not, sending good vibes works too!

0 shares
« I’ve Been Living Better than I Have Been Blogging This Month :)
#AgNerd T-Shirts That Grabbed My Eye in Kansas City #ACFC12 »