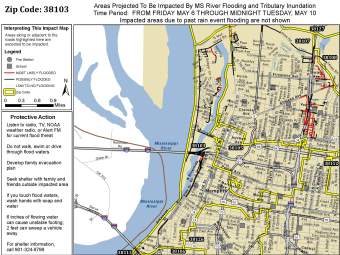 Thursday I thought with the third day of sun, maybe things were returning to normal, however watching the local news at night, I know that’s far from the truth. I’m sitting here stunned. But given the report that the Memphis/Shelby County Emergency Management Agency (MSCEMA) will be issuing new map tomorrow morning, I’m going to wait to post this then, but I am going to go ahead and write most of this while my mind is trying to process the news so I don’t forget things.

UPDATE: The maps are incredibly detailed this round. Very clearly showing that most of Memphis has a low possibility of flooding. HOWEVER, I encourage folks to look at the maps ans see if you or a member of your family are possibly or likely to flood. I’d suggest getting people, precious items, & pets out of those homes marked in red starting now. No need to risk your safety and the safety of others. Here’s one of the maps I reviewed and it links to the site where the other maps can be found.

A flood warning has been issued for all of Shelby County. At this time none of my family is being evacuated but the list does include some of our zip codes. We will be studying maps closely to determine whether our safety will be jeopardized. The new maps include more detail including landmarks. Than the ones previously used in hopes to gain clarity about which exact areas are impacted. Looking at the previous set of maps, my family was not in an evacuation zone so I’m hoping the new one clarifies that for us & we all get to stay put safe & dry in our homes. If MSCEMA, we will certainly take recommended steps to get to safety. Evacuations are expected to impact 20,000 people here.

As I went through maps, materials, etc. I am wondering if I should have taken my camera with me on a recent walk down memory lane. I took my niece to see my grandparents homes and its unclear if my paternal grandmom’s former neighborhood will be impacted. It appears clear that some of that immediate area has standing water. I anticipate going back downtown this weekend and will take photos but I felt like I should pass this along for friends, relatives and fellow Memphians as well as folks who have connections to Memphis. Stay safe and dry!