Those of you who know me well or who have read my blog a long time, may remember my family is closely connected to Japan. You may not know I also have had a real interest in the Japanese internment camps in the U.S. for several reasons. And all of them have incredibly clear images in my head.

This process of interning Americans because they had ties to an enemy is something that I didn’t remember hearing about in high school. And even when I had learned more about it, it wasn’t until I met all the in-laws of a friend that it really sunk in. The in-laws included a granddad who lived in the Denver area. He had lived on the West Coast until he like other Japanese Americans were loaded on trains and sent east.

As the family came to Memphis for the wedding, it was the first time he had been that far east in decades. The reason? He had been interned in Arkansas and he had no desire to get back into that part of the U.S. again. As I talked to the family and they shared stories of visiting the place where the camp once was….. well, it has stayed with me for decades. Even though I don’t have digital photos available, believe me, his image is forever etched in my memory.

some of my Japanese family, including Obaachan a couple of years ago

I have talked about the fact my extended family includes a Japanese  grandmom, etc before. My little sister lived in Japan a couple of years and we had the chance to meet Japanese farmers there. I have family here in the US who are first generation Americans. They are exactly the kind of people who were interned. They were taken from everything they knew and moved into barracks with a limited amount of their belongings.

So thinking about it, my nephew could have been interned because he has family in Japan. Nevermind it’s his grandmother he is connected to, nevermind he’s never done anything wrong, nevermind the idea of innocent until proven guilty, nevermind that America is a country that is made up in the vast majority by immigrants and on and on…. it is just so … so unAmerican.

Visiting the Site of an Internment Camp in Hawaii 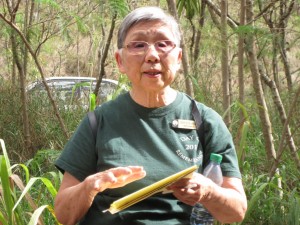 Jane Kurahara, a volunteer from the Japanese Cultural Center

A year and a half ago I had the chance to go to Hawaii and one of the experiences I had was to tour the site of Honouliuli former internment camp for Japanese Americans. That’s where I met Jane Kurahara and others who were involved with the Japanese Cultural Center (a site sponsored by them provides history of Japanese internment in Hawaii).

Ms. Kurahara joined us at the site and helped us visualize some of what had been on the site decades ago. She also introduced us to social scientists who were trying to piece together more of the stories as like so much of our history, many people did not want to talk about it after they were allowed to leave the camps. I can imagine thinking about such a tough reality was far from enjoyable.

Here are a few more photos from my visit to Honouliuli.

New Images to Add to History

After I got home tonight I opened my laptop to glance at social media as I ate a salad and watched TV. I really didn’t expect to be grabbed by anything. I really thought it was a time for me to just see what friends were up to, etc and then I saw this tweet from Poppy Davis.

Here is a part of the article that just drew me in:

In 1942, a few months after the bombing of Pearl Harbor, the U.S. government forced Japanese immigrants and Americans of Japanese descent to report to barbed-wire camps. Many lost their homes to thieves or bank foreclosures.

A state agricultural inspector, Mr. Fletcher acted instinctively to help Japanese American farmers. He quit his job and went to work saving farms belonging to the Nitta, Okamoto and Tsukamoto families in the Florin community of Sacramento.

In the face of deep anti-Japanese sentiment — including a bullet fired into the Tsukamoto barn — Mr. Fletcher worked 90 acres of grapes. He paid the mortgages and taxes and took half the profits. He turned over the rest — along with the farms — to the three families when they returned to Sacramento in 1945.

via Bob Fletcher, who saved farms of interned Japanese Americans, dies at 101 – The Washington Post.

Part of the reason the tweet from Poppy grabbed me so much as it reminded me that there were Americans who stood up for what was right, even when they were a minority and even when it meant the potential of putting themselves in the line of fire. That’s what Bob Fletcher did. The quote he gave the local newspaper a few years ago summed it up — “I did know a few of them pretty well and never agreed with the evacuation,” he told the Sacramento Bee in 2010. “They were the same as anybody else. It was obvious they had nothing to do with Pearl Harbor.”

This simple clipping reminds me about the kind of men and women who farm and who shape our communities. Like Mr. Fletcher, they work hard, they are involved in their communities (he volunteered with the fire department and the water district). They are the people we hear too little about because they don’t seek attention. They may look like my family and they may not.

I have another face for Japanese internment now and while I wish I had a chance to meet him before he passed so I could tell him thank you for doing the right thing. Even though I didn’t have that chance, I am thankful for having another face with which I can bring another dimension to my knowledge of Japanese internment…. It now includes Sacramento area farmer Bob Fletcher. My sympathies to his family and those in his community. I am sure they feel a great loss.

0 shares
« Trying Out CrossFit For a Change of Pace With Fitness
What’s your favorite cheese? & Some of My Cheese-Related Travel »