I spent Friday & Saturday in “mommy blogger” central — I went to the Mom 2.0 Summit for work. If you haven’t hear about Mom 2.0 before, I encourage you to watch this video the Today Show did on Mom 2.0 for some general info (PS Not everyone is a mom) or see my friend Danyelle’s post about how it reinvigorated her passion or scan the list of recaps Mom 2.0 posted to see what grabs your eye. The conference allowed me to not only work but you can’t help but be personally impacted when you are in a group of so many people who are passionate about what they do! 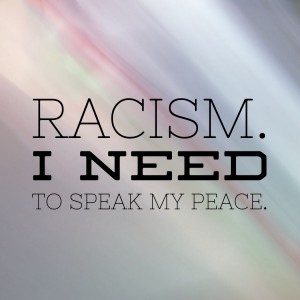 I got to see blogging friends and I also met so many incredible people I have only read. I had a chance to think about ways to improve my blog. There was lots of dancing to be done and more. But I think it is the deep thoughts that were provoked in the sessions that will stay with me. There were a few deep topics but for me, some talk about race really got into my head. Maybe it is because of who I am or who my family is or where I grew up or what I’ve experienced in the world. And maybe it is because I see friends impacted by it in real ways and know that I am lucky.

A week ago, that rancher who’s been raising cane out west said some ignorant racist stuff. I hadn’t seen it but when I saw a life-long friend ask:  “I never learned how to pick cotton. But I graduated from Yale. Does that count?” I replied saying I had learned to pick cotton and didn’t go to Yale but felt sure some idiot said something stupid. And I let her friends know that I know hundreds of farmers and ranchers who I had never heard say such things.

Calling Out Her Sisters

That was still in my head when a blogger named Kelly Wickham aka Mocha Momma read a post she wrote last year. It truly grabbed my heart and head in a way that made me think long and hard. As she read, I had to find the blog post and tweet it, imploring friends on Twitter to give it a read.

I beg of you to read her post….. this is the way it starts:

I see you, sisters.

Maybe you don’t know this about me, but I’m leaning in here. Maybe not in the way the Lean In “movement” suggests that I do in terms of getting a job or a seat at the table, but I’m leaning in. I’ve tried, and failed, when I’ve done all the leaning. I’ve lost out on jobs, been demoted, and told that I’m in a position because of my race. I interviewed for a position a few years ago within my district and another candidate, a White woman with whom I worked at the time as a fellow teacher, said to me, “As soon as I saw your name on the interview list I knew I’d lose out on this. You’ll get the job. They need a Black person.”

She said that out loud to me. In an office full of people. I started floating above my own body in that moment because, no, that didn’t just happen, did it?

Indeed, when I was leaning in during that very moment, I got the job. The next time I saw her I pulled no punches. “I got the job alright. But I got it because I was better than you. Not because I’m Black.” Whenever I happen to run into her again she refuses to speak to me. Fine. I leaned in and got snubbed by someone whose feelings got hurt when I “got racial” with her. She told this to a friend of mine who repeated it to me. No love lost. I didn’t mind. She snubbed me in the Education World in which I live.

via Kelly Wickham – Mocha Momma – Calling Out My Sisters.

Kelly’s post takes on the issues of race as she sees them and points out that some of her peers and friends, some of whom I assume were in the room as she read her post, were not catching some of the racism she was seeing. The issues are real and yet people in her world were glossing over them. I couldn’t help but wonder if I have done my part.

In my mind, I am someone who does see racism and prejudice and does call it out sometimes…. I have talked about race in my family. I live my life with friends of various backgrounds and colors.

But I also know that friends who have teenage guys they love as deeply as I love my nephew, who’s sons have every bit as much promise as my beloved nephew. Those guys have to be reminded differently to be careful if they get stopped for a traffic issue or are in the wrong place at the wrong time. They have been places where other members of society have been nervous to be around them simply based on color. I like to hope that is disappearing as younger generations come into positions of power, but sad reminders on the network news make it clear we aren’t living in the land of my hopes.

Prejudice is what happens when for one reason or another, you are seen as less than. Racism takes it a step further and power is inflicted in a negative way. Both of these are seen far too often in the world. And yet, the vast majority of people I know are not prejudice or racist. So why does it continue to happen? Well maybe one of the reasons is folks don’t step up.

For me, my world has always been multicultural. And yet, that never meant I knew enough. I’ve taken classes to learn more about interracial communications, about race relations & politics and about cultures of the world. Oh, and yes, I pay attention to some of the things different parts of society enjoy and find common ground. I like lots of hip hop and lots of rap even if I’m not as rachet as some (you know who you are).

I Want a Better World 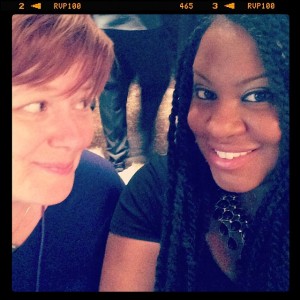 My dear friend Danyelle aka The Cubicle Chick who I obviously adore as you can see in this photo. 🙂

I think these things need to change. I think we can do better. And I take action that will enable that.

I am proud to have friends who cross the spectrum of colors. I am lucky that some of them are wiling to open up on topics that others keep under cover. They help me see things when I may not on my own and it is part of my responsibility to pay it forward sharing my perspective.

I consciously try to go out of my way to smile at groups of black teenagers & men because I have seen too many white women clutch their purse tighter or walk faster when they see a stranger of color nearby and I have to wonder if it would have been different if the stranger was white.

I wonder why the disappearance of hundreds of smart Nigerian girls, girls who sought to improve their situation are abducted get so little media attention when the TV shows lots of coverage of princes in Memphis for a wedding. I join the people on social media in sending a message that we demand people #BringBackOurGirls.

I want all kids to have the same opportunities in school, whether that is elementary school or college. Having gone to integrated schools in Memphis, I found it hard to find a way to be comfortable on a college campus where the only black students were athletes. If you don’t know how this warps the world, listen to these students from UCLA talk about how few black students are there. I advocate for better education funding and I support inner city schools through Donor’s Choose.

I know there is a lot more that needs to be mentioned but for now, I’ve started the conversation and it is all due to hanging out with some “mommy bloggers.” The phrase doesn’t really describe them any more than black youths describe some of the folks I’ve been writing about. There is a complexity and a depth of knowledge and experience that the two words aren’t capable of capturing. And since some of us there weren’t moms, you know that isn’t exactly right. Maybe we could just call us bloggers and let kids be kids.

What are your thoughts?