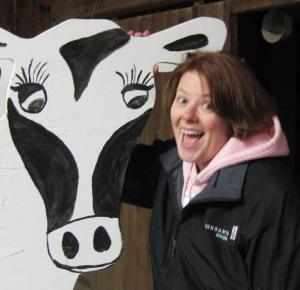 When I started blogging a few years ago, I picked WordPress.com for a couple of reasons. I started the blog on something of a whim when I wanted to tell a story that went with photos I wanted to share. I had no idea how many things I’d one day want to rethink. Last year I rethought having two blogs — one on travel & one on ag — and when I asked what readers though it was clear! I should go for it! I’m so glad I rethought that as it has given me so much more flexibility! But hosting was something I suppressed thinking about too much because there were too many unknowns that made me worry. So I put that off to another day. Well I’ve reached the other day.

Starting out, I figured I had a couple of options, several friends were using free versions of blogger or WordPress and the price seemed right. I had a private blog on Posterous, which I love but found didn’t offer enough ooomph for where I wanted to go, but it remains a great choice for the project I have there. The lack of commercial activity on WordPress was a draw for me — I had seen some blogs that I thought were so overly commercialized that I had trouble finding content. It’s funny to say, but I never even thought about doing my blog as a self-hosted effort. To me, that seemed like something that only companies would want to do.

Once I had been blogging for a while, I wrote what I now consider a breakthrough post that shaped my first year as a blogger. The day I posted my first blog post that was getting a lot of traffic at once (it was about being speechless or ready to rant but choosing the middle ground instead) I saw that an ad from WordPress was put there based on Google keywords. That’s the day I began paying for my blog’s services. I didn’t like the ad showing up, so I paid a fee to have ads stay off my blog.

Over time, I paid for more ways to customize it. There was the fact that I wanted to have my own domain there rather than keep the WordPress in the address. So I registered domains with a service and paid WordPress to put one of them on here. I was putting lots of photos up and wanted the flexibility to put up audio too… and then I wanted to upgrade the look of the blog so I got a premium theme that allowed my home page to get a spark…. and then I wanted to fine-tune that a little and…. I started writing more and posting a lot more. And I started planning what I could do to make it better.

As I was asking for input from people on things I could do to take it to the next level, I considered whether to go self-hosted or now. It’s not that others suggested it, many didn’t realize I wasn’t already thanks to the money I had put into design, etc. But I wasn’t sure so I asked the folks I know through #blogchat, and talked directly to Mack Collier for his thoughts. I decided it was the right time for me to make a move and started looking for the expertise to do that knowing I personally didn’t have the time to develop that expertise at this time of year. 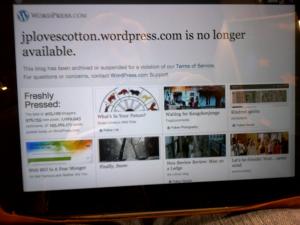 After I already had someone on-board helping me, I got a real scare as WordPress.com took my blog down one day and said I had violated the terms & conditions. I was able to get it back up quickly as it was a mistake, but for me the reality that I had spent so much time creating something that was no longer in the space I had built it, made me certain self-hosting was best for me. I’ve had someone working on it, and although its taken longer than expected…. I hope Monday I can showcase the new set-up.

That’s made it a little complicated to keep my regular posts coming, especially with the amount of travel I’ve been doing, but I hope to have things back in working order soon.

I’ve been rethinking some other things as well and they are going into the new, improved site along with some of the friendly feedback people have given me as I asked for opinions. Some of those ideas didn’t fit what I want to do though so don’t expect to see a big shift… I like the way my blog community has been growing, I just want to make sure I’m doing my part to encourage its continued health. And I think the new changes will do just that!