I have to say, with the increasing amount of ink you see in person and online, I have gotten pretty used to it. Quite a few friends and family have tattoos honoring various people, things, etc. Seeing what people choose is interesting and the artwork can really grab your eye. I recently stumbled into the farm tattoo world.

A couple of weeks ago, a farmer I met on Instagram from the Sacramento Delta — @vierrafarming — shared a photo of a half-sleeve tattoo and it really was a thumbstopper.  So much so I asked him a bunch of questions and ultimately asked if I could share it on my blog.

@timpac did an amazing job on my half sleeve! Never I’d come out looking soo good!

As someone who’s been out on rice farms for decades, I’m struck by the detail in the combine. I mean seriously look at the shading and the tiniest of lines on the header (that round part that brings rice into the machine). And you can see the crop and levees too.

Ever since I was about 16 I’ve always wanted a half sleeve tattoo and just could never figure out what I wanted I just knew I wanted something that meant a lot to me. Then I got too thinking I’ve owned a harvester since I was 16 I love operating it and the whole process of harvesting so I knew I would want that and then “Sacramento Delta” ( my home town) in it so I took the artist a picture of the harvester and said add like a barn and the river with Sacramento delta and he came out with this.

His image half-sleeve reminded me of a great corn tattoo on a guys calf a few years ago and surprisingly, Facebook reminded me it was the same week. Surreal huh? I asked this guy as we were boarding if I could take a photo & he gladly said yes. He really loved corn. Check it out: 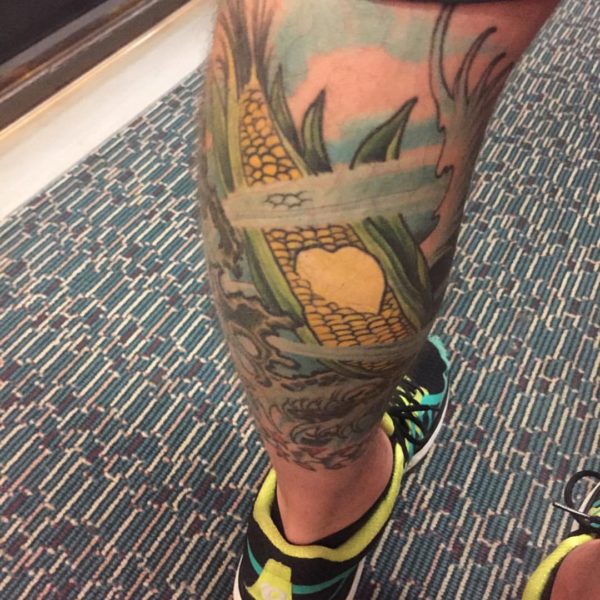 Sharing that photo on Facebook and talking about how I was really interested in some of the ink that represents farming and food I ended up getting a few more sent my way!

Sean is one of the farmers I’ve met through Twitter. Someone told him I had posted about farm ink cause they knew he had some tattoos that deserve to be seen!

Twisted Iron is the name of the family’s farming company in Alberta. It’s a small farm, still really trying to get established. The grow peas, wheat, barley, canola and flax. Sean just had the logo revised last winter, and liked it so much he wanted to make it permanent. And you can tell he’s a fan of that wheat crop too. I love the detail! 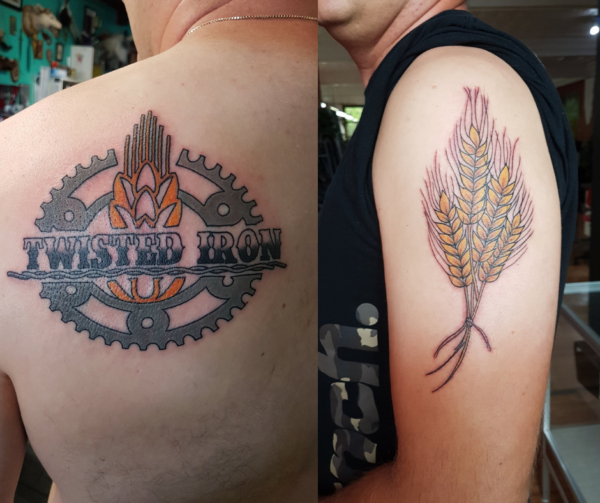 All the conversation about farm-related tattoos, immediately made my friend Jennifer Osteholt from Plowing Through Life think about the need for me to see the ink that Ohio pig farmer Rick Snyder has assembled over the years. Rick is a major fan of ink.

When I saw the photos of his various pig tattoos I asked if he could give me more information cause it really is an investment at that level!

So I’ve really been interested in tattoos for a long time now. I got my first tattoo shortly after my 18th birthday, which has long been covered up by now. I’ve probably been tattooed over 30 or so times so far and I have no intentions in being done. I’ve already got my next several planned out in my head haha.

Most of my favorite tattoos are my pig tattoos. I have 5 of them, which may sound (crazy) to some and even brings questions at times. People ask me all the time “you really must like pigs?” The answer is I do. See we own and operate a very large and reputable breeding hog operation. We have a boar stud that houses over 50 boars that we collect and send semen on and sell to customers across the United States. We also sell a large number of Bred Gilts (pregnant females) to customers ranging from east to west. So yes I do have a large love for all the pigs in my life and I choose to show that through my love of tattoos.

Sometimes I have to think for a while to decide on a pig design and sometimes they just hit me fast. It’s usually the ones that hit me fast that I end up settling on. 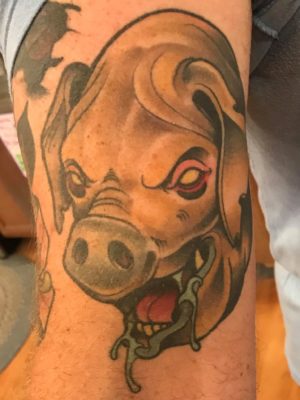 My first pig tattoo I got several years ago when I was on the way to deliver a pair of Duroc Boars. I got a notification on my Instagram that one of my favorite tattoo artists was taking walk in appointments that day and to just show up to the shop and it would be first come first served. I was actually driving really close to his shop at the time and showed up with the livestock truck and trailer. I was first in line and he ended up drawing up the design right there on the spot. I even took him out to the trailer to show him the boars I was hauling for inspiration. I called my customer and told him I would be a few hours late and proceeded to lay down in his tattoo chair. The rest is history.

I have gotten 4 more pig tattoos since then by multiple different tattoo artists and would love to keep getting more by different artists as well to continue my collection. Tattoos are definitely a big part of my life and especially my pig tattoos. “Tattoos are a Memento that we keep through life and retain after death. They can not be lost, stolen or borrowed and is far more interesting and expressive than any other thing.” This is why I have such a love for tattooing.

Have you seen farm tattos that rock?

This blog is part of the communications efforts by JPlovesCOTTON LLC.
24 shares