This week, I was reminded of the last time I took my youngest niece out on the farm. It’s been a few years and as I looked a the photos, I thought to myself how she can do anything. We called a friend, he told me where a cotton picker would be running and off we went. I wanted her to have the experience. She really enjoyed it. 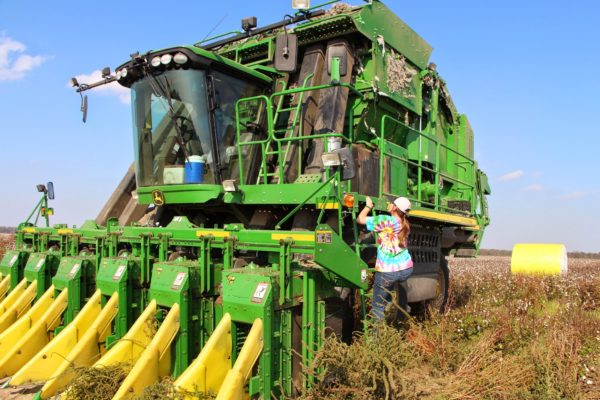 She’s really trying to decide where she will go, what she will do in life…. and the fact that she likes to know about how things work and doesn’t worry about some of the stereotypes people put on her grabs my attention. She’s an amazing girl.

The memories were especially touching as the news of a country divided, of people doing such horrible things had sort of overwhelmed me. I need more positive stories. I need more real people.

One Farmer, One Day 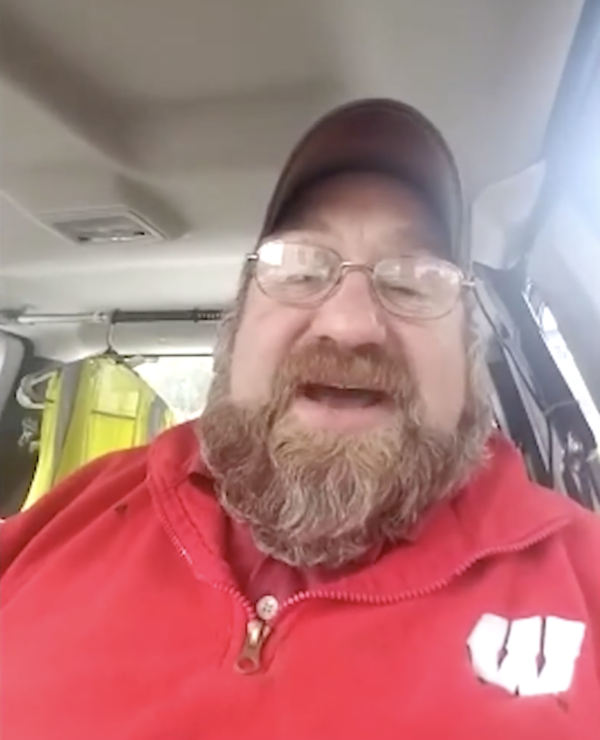 And then I read this story on Facebook. It is written by a Wisconsin farmer named Jeff Ditzenberger about a day this past week he won’t soon forget. And having heard it and talked to him a bit, I don’t think I’ll forget it any time soon either! It’s a bit long, but I promise it is worth it!

(Please note: This is reprinted in it’s entirety with his permission.)

Today is a day I’ll not soon forget..

As I was combining today, I was unloading into the auger cart and I saw a vehicle go by a couple times slowly and then pull over and stop. I had a minor repair to make and the vehicle stayed… I was a little concerned until I happened to catch 3 little sets of eyes looking out windows.

I went over and they rolled down the window and I asked if they needed anything and the lady explained their grandchildren were visiting from Florida and had never seen “farmer stuff” up close. There were 2 boys and a little girl.. I’d assume they were between the ages of 6 and 9. The two boys were all giddy but the little girl, while sweet and excited was pretty quiet.

I also happen to notice that she kept turning away from me and there was a scar or a birthmark or something on her face… And I felt really bad trying to figure out what it was because I was feeling like I’m staring at her..

She then said No we’re sure your way too busy for that and I said no I’m by myself for now I’ve got time so she asked the two boys if they wanted to go and of course they did but the little girl stayed back.

I asked her again if she wanted to go and she said no thank you and so the boys and I went and got in the combine and we made one round and came back… While in the combine I said why didn’t your sister want to come… they said shes shy. I then, because of curiosity, asked them about her face… And they told me it was a birthmark and that she gets picked on about it a lot.

After their ride I walked them back over to their grandparents car and I said to the little girl How come you didn’t want to go for a ride? And she said well the boys always say that that kind of stuff is just for boys not for girls…

I laughed and said You know, there are girl farmers AND I even had a young girl in that cab just yesterday. Would you like a ride? She looked at her Grandma and she said go ahead if you want.

I then asked the grandmother if she had a smartphone and knew how to video… She laughed and said I have grandchildren of course I know how to video… So I told her have your phone ready and when you see me turn on the yellow flashing lights video the combine.

The little girl and I got in the cab and I turned the machine around and went back into the field at the end of it and came back facing her grandparents vehicle. I then said to her…here.. you can turn the steering wheel… she first looked at me like I was on crack cocaine… But I finally convinced her and I told her not everybody gets to do this but people that are part of the special face Club definitely get to…but its a secret reason why you get to drive so you cant tell anyone. We even pinky swore on it…

The smile she had made this old tired grumpy mans heart soft and there must have been some Bean dust in the cab because my allergies started acting up just a little bit… So I let her “steer” and turned on the yellow lights on the way back so her Grandma could video tape her “driving by”.

We got out of the combine and she still had a huge smile on her face and ran over to her grandma and was a little Chatterbox did you see me did you see me I got to drive I got to drive… Her brothers were obviously a little miffed… And ask her why she got to drive… I was afraid she was going to tell them why… But with all the sass of a little brunette girl with her hair in a pony she looked at them both matter-of-factly and said Because girls CAN farm.

And all I could think of was if one of the combines hadnt broke down yesterday, I wouldn’t have been in that field this morning, and I wouldnt have been by myself and we would have been really pushed wherever we were at to keep up with everything…and it proved to me once again everything happens for a reason…

All three of their faces were on my mind the rest of the day but mostly hers… not because of her birthmark, because of her genuine smile in the confidence that she showed when she got to get out of that combine and “brag” a little to the boys.

My gramps told me long ago to always be patient with children and people you come in contact with. I remember the countless times that he would let me “drive” the tractor… and the exhilaration and happiness that I felt during that time… And I swore that I was going to make other people feel that way when I got older… and I’ve definitely failed at that numerous times.. but I’m trying..

But, Im kind of thinking maybe that’s what I did today or maybe that little girl made me feel like that little boy with his Gramps all those years ago.

Today was a good day… and one I shall not soon forget.

Here’s a video that Farm Journal TV did talking with Steve a bit about it. I don’t know who the kids from Florida were, but I hope they know they brought smiles for people like me!

And I hope that little girl continues to show the joy of knowing she could drive a combine and more… and I bet she looks at the video again and again, just like I do of the ones of my girl when she’s on top of the world.

[click_to_tweet tweet=”Love this story, maybe we should all think about how we can spend 30 minutes to make more our days more memorable! ” quote=”Encourage your tweeps to invest 30 minutes in such positivity! ” theme=”style2″]

This blog is part of the communications efforts by JPlovesCOTTON LLC.
62 shares