I was among the millions last night who were at home having a peaceful night until we realized the injustice in Ferguson had continued to get worse. We saw Michael Brown’s death Saturday and asked questions and we are still waiting for answers. The frustration is growing. Like so many of my friends, we watched Twitter and local news for more information about what was happening in the nearby town of Ferguson, a town I visited for the first time Monday.

Like many others, I was outraged by what I was seeing and hearing and my actions may have gotten more emotional than they should have. Today as the sun came up, though the frustration is still as high as ever, I hope to be able to express myself more clearly.

There are many things that I understand about this horrible situation and some things I just cannot get my head around. I think my predicament is pretty common this week not only in the St. Louis metro area I now call home, but in homes throughout the country and indeed in homes around the world.

I feel a responsibility to at least try to clearly communicate these things in hopes that more people opening the lines of communication will help us get to a place where we can have both justice and peace. As I put my thoughts here I hope friends will join me in filling in gaps, providing their opinions, etc.

Things I Understand about Ferguson 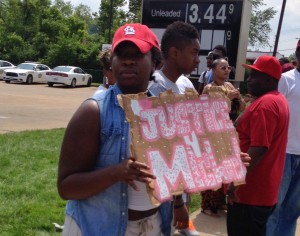 Let’s start with some of the things that I think are clear.

Things I Can’t Understand About Ferguson

Looking at this list, you may think I feel like I know more than I don’t. Only in terms of number of bulletpoints. So many of he unknowns are big things that really leave me struggling. I hope the conversations open up soon and answers start coming out.

0 shares
« After the Ferguson, Missouri Riot, I Made My First Trip There
Thinking Through “No Justice, No Peace” VIDEO »