Saturday I was traveling home from work in California when I heard that Mike Brown, a teenager in the St. Louis neighborhood called Ferguson, had been shot by a policeman. I wondered what happened and I checked the internet but I kept going about my busy life that is until the riots happening in Ferguson Sunday night slapped me out of it.

This morning as I worked, I turned on the local news and watched as people peacefully gathered in Ferguson, I decided the things on my “to do list” were going to be set aside. Instead, I felt like I should join people in Ferguson at least for a bit. I wanted to understand the Ferguson, Missouri riot. 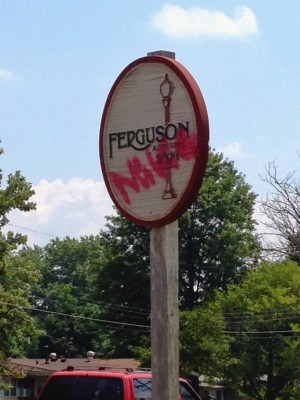 What happened in Ferguson?

The details are fuzzy… but everyone agrees on the fact that an 18 year old man named Mike Brown was shot by a police man. There are questions surrounding what prompted the interaction, questions about why deadly force was used, questions about how many shots were fired and why, questions about why an ambulance didn’t immediately try to revive Brown, why he was left in the street for hours and more.

Last night, friends and I were all watching the Twitter streams, news on TV and conversations popping up on Facebook. What I saw was a divide. There were people who wanted justice now, there were folks who said they couldn’t understand how looting honored Mike Brown’s memory and there were folks who were just asking questions and sending prayers. All of it was just so sad to me that I really was having trouble processing it.

Why go to Ferguson today?

This morning, I saw the damage that had been done in the Ferguson riot. The ways anger had shaped the community. And while everyone else was talking about looting, all I could think about was this quote from Mike Brown’s mom that was in the NY Times.

“You took my son away from me,” she told the television news station KMOV. “Do you know how hard it was for me to get him to stay in school and graduate? You know how many black men graduate? Not many. Because you bring them down to this type of level, where they feel like they don’t got nothing to live for anyway. ‘They’re going to try to take me out anyway.’ ”

As I looked at the news, I saw mostly black faces. The only white faces I saw were buried behind big cameras or faces of the police. I didn’t see white people simply standing there wondering what happened to Mike. And as people were saying they hoped calmer heads would prevail in Ferguson today, I couldn’t wonder how many would go over there. I thought about how many times we’ve talked about how bloggers need to stand up for what’s right. So I decided to go. I wasn’t sure what I would do when I got there, but I would go.

Having moved to St. Louis about three years ago, I have been warned about how rough North County is in a number of ways. The neighborhood is really urban. There are not a lot of white people living there. The economics in the area are different than my U City neighborhood. And yet for me, Ferguson is a lot like areas I have known my whole life. 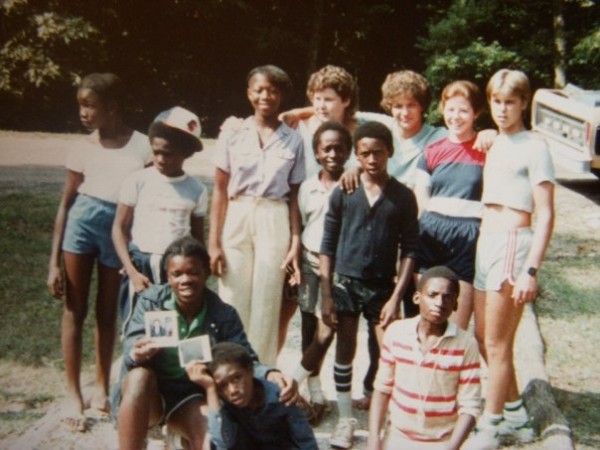 This is a photos from Northside Christian Camp in Memphis. Looking at this photo I wonder where Tyrone, Edna and Andre are, I think of Quenton, Ontario, Laderio and William…. even decades ago, we were trying to help kids see a way out.

My grandmother lived in an all black neighborhood for most of the years I had her. I grew up going in and out of neighborhoods where my hair color and skin was not the norm. I grew up with friends from those neighborhoods in school with me. I spent summers volunteering to get kids out of a Ferguson-like neighborhood in Memphis to places with trees and fewer cares. When I lived in the Delta, I had friends on both “sides of the tracks.”

I have no idea what happened this weekend. Hopefully the investigation by third parties will help shine a light on it. What I think more people are frustrated by is the fact this can happen and happen again.

We can do better for ourselves and each other. We should feel we are treated with respect. We should expect it of others. And we should react with compassion when a mom has lost her son. It is a tragedy and adding to tragedy with destruction of property doesn’t help. But I can understand frustration running so deep that some may not be able to think straight.

I understand some of our cities have become rough. And being a cop there can’t be easy. I’m sure some of our people have become hopeless and that is horrible. It must seem like a thankless job at times as people are too afraid to help change the situation. I know police are to protect and serve. We need to figure out how that can best be achieved as a society cause it seems the problem pops up all too often.

That makes the frustration here all the more real. They are frustrated about what happened to Mike Brown as well as what the community faces every day. So I was there to simply show with my presence that I agree. We can do better and I want people to know I expect it. 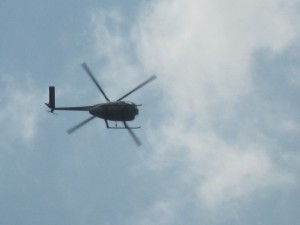 Since I’m not at all familiar with the neighborhood, I wasn’t really sure what I was going into. I thought about making sure I had battery power for the phone and parking someplace secure. I wasn’t sure I was headed to the right place until traffic got heavier and a helicopter was flying in circles nearby.

Then I started seeing buildings hit by looters last night. And graffiti that clearly showed the outrage. I’ll share a few pics here for your information. 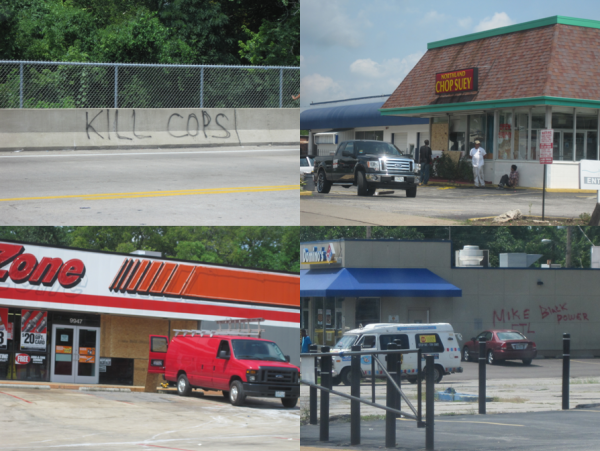 It is more than unsettling to see a neighborhood in this kind of turmoil. There were glass and plywood deliveries being made up and down Flourissant. And there were people on the sidewalks up and down the road. Some of them were clearly on their way to work or to catch a bus and others were kind of hanging out. Eventually I saw the Quick Trip that I had been seeing on the news. It was home to a crowd of people from the neighborhood and a crowd of cops too. I passed and doubled back to find a place to park and in that time a fire alarm was called and police descended.

The Vibe in the Crowd 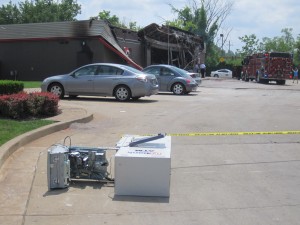 I took my time walking up to the Quick Trip. It didn’t take long til I was soaking up the fact that I was standing near an ATM machine that had been dragged or pushed from the building. I asked why the fire department was back and a woman nearby said the store was still smoking since last night.

There were lots of county police between the crowd and the store. They didn’t look tense but sure as hell weren’t relaxed. For the most part, the crowd of people was quiet.

People were standing around and more than anything, they wanted answers and change. 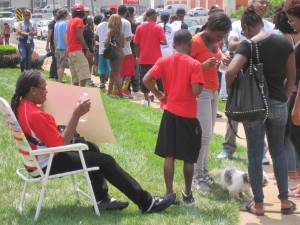 Every once in a while, someone would start a chant. maybe “no peace” followed by the crowd screaming “no justice.”

One woman, who had brought a law chair and sat there with a sign saying “no more injustice for unarmed men” saw me wandering and simply said it leaves you speechless. I agreed. Then she said it was just too much having Trayvon Martin and this case both. I agreed. 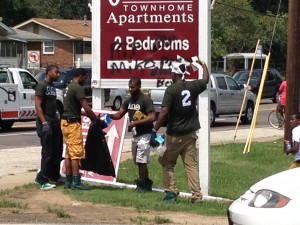 A group from a fraternity came through picking up trash and I had to pause to think about what could have been.

Another woman who probably had adult children walked up and was just shaking her head. She finally said the store had been here since she was a kid. Now it was gone. And she asked whether anyone could possibly think that would help.

The chants made a comeback after a while with the guy on the megaphone screaming “hands up” and the crowd doing just that while replying “don’t shoot” ( I posted video on Instagram) It was poignant because it seems that sometimes shots get fired quickly. And while I probably don’t represent much of a threat to a police officer, I have had conversations with friends who have made certain their sons know this is the routine. Sons are taught immediately get your hands in the air and reply “don’t shoot” in hopes of making it through.

As I left Ferguson, I was thirsty. After getting a few blocks away and seeing an area that looked normal, I pulled into a drive through to get a cold drink. It didn’t take long to realize the business was closed for the day. My guess is they didn’t want to have employees dealing with the Ferguson riot and potential crowds. The gas station nearby was crazy packed probably because the place lots of folks would go was burned and a shell. It will be a long time before normalcy is found and I really hope it is a new improved version of normal.