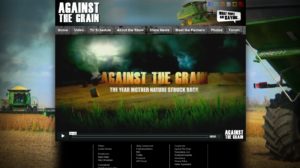 Today, I got home from the airport and should have been busily working on so many things. As I turned on the TV, I thought I would find something that could play in the background. Instead, I found something that left me spellbound. It’s a TV show that talks to various farmers about the 2011 season and how devastating Mother Nature was here in Missouri.

The TV show is called Against the Grain and they have a social media presence that crosses several channels — Twitter as @AgainstTGrain, Facebook as Against the Grain TV. Seeing how they describe the show’s coming into being, helps you understand why I thought the show was so gripping!  (You can click on the photo at right to see the promo.)

It was inevitable that Hollywood would someday embrace the steadfast families who, against all odds, contribute so much to our tables, our economy, and our lives. Against The Grain is empowering and inspiring television programming designed to bring those families, and the power of the American spirit, to viewers nationwide.

There is one special Against the Grain: Mother Nature Strikes Back which included visits with several farmers through the 2011 season. The farmers included in this episode (which I would love to think of as a pilot that gets picked up by a production company) are described on the website the following way:

Farmers are America’s original entrepreneurs. Being a farmer is a full-time profession that requires a wide range of skills and expertise–from electrical wiring to plant pathology–and a high level of risk-tolerance. It is not for the timid, or for people who like to sleep late. You have to give it your all, come hail or high water… and do it all again next year.

Kevin Mainord is a Farmer, and Mayor of East Prairie, Missouri. East Prairie (pop 3,176) is in southeast Missouri, where the Mississippi and Ohio rivers meet.

Although I don’t think I’ve ever met him, I am positive we know people in common. And hearing him describe the force of the destruction unleashed when the Army Corps of Engineers blew up the levee flooding the Bootheel…. well, I feel like I know him very well. You may remember I watched the flooding last year with incredible awe and took photos and wrote posts.

The Hughes family (above left) of Nevada, Missouri: Lincoln and Trinnade are full-time farmers. They raise corn, soybeans, wheat… plus a few chickens and pigs for the boys for 4-H. The three Hughes boys love to hunt and they are all hoping to be farmers.

Tom Raffety (above right) farms in Illinois and Missouri, on both sides of the Mississippi river.

I have to wonder if my tuning in late meant missing more of the story from Tom Raffety, but I got a lot of the Hughes Family’s story. And it was tough to take in so many ways because eit so closely mirrors what I’ve seen this year. Talking about how the weather had pushed it from potential to little hope to near hopelessness for the crop. And yet, they Hughes’ discuss all the things friends do — how they can possibly buy a tractor or how they could possibly farm without it, whether the crop is too far gone to spend money on or whether hope remains. I felt like I had visited with them on one of my many farm visits, even though I know I haven’t.

I encourage you to find out when it will air in your city/town and if it’s not scheduled, push your local stations to give you good programming like it! They have lots of airings coming up in the next couple of weeks. PLEASE WATCH! You’ll be glad you did!

UPDATE February 2013 — Trinnade Hughes has set up a blog where you can learn more about their family farm in Missouri. The blog “The AGventure of a Lifetime” also has a Facebook page.

0 shares
« My First State Fair & It is Big! Got tips? #IAStateFair #IowaStateFair
I’ve Been Living Better than I Have Been Blogging This Month :) »