The other day as I finally met Miss Dazey in real life, we got to telling stories. Her husband Mr. Bruce used to be in the trucking business and he prompted me to remember something. I hadn’t thought of this in a while, and we had some laughs as I told it so I hope it translates in the written word.

Highway 61 is known as the “blues highway” in large part for the role the highway played in the movement of musicians from the heart of the Mississippi Delta up to Memphis and frequently on North to St. Louis or other cities. When I moved to Mississippi it was still a two-lane road from Cleveland to Memphis but they had a plan to make it a four lane road. 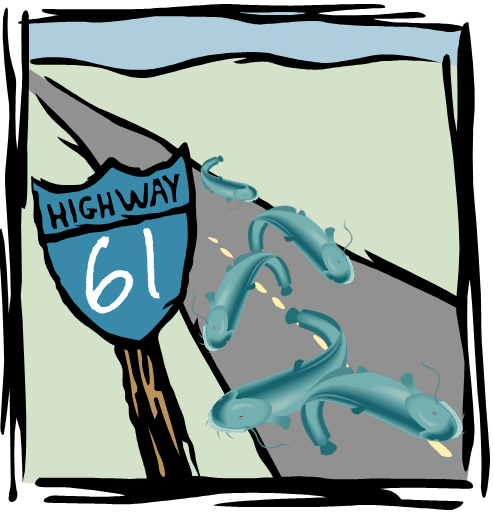 Since I had family in Memphis, I frequently made the drive up and back. Sometimes I’d turn off 61 for a change of pace, but the straight shot of Highway 61 usually won out over any idea of seeing the sights. The sights after a time or two, seemed to balance out.

Anyway, the drive was about three hours long in the two-lane days. There were always slower vehicles that you would have trouble passing. And it would always seem to drag on as several vehicles would need to get around.

My sister and I took the airline up on an incredible ticket price for round-trip travel to Amsterdam one spring. As has been known to happen…. I was trying to squeeze in as much time on vacation as possible. We flew into Memphis late one evening and rather than make the drive, I crashed at my mom’s house. I got up the next morning to drive home and was just about 40 minutes into the drive when things got a bit nuts.

See, a pickup truck was in front of me and we were nearing the cemetery and railroad tracks just before the Helena cutoff (if you are from the Delta you know EXACTLY where I was, if not, suffice it to say it was pretty remote aka the middle of nowhere).

I didn’t see the next thing coming, but everything seemed to move in slow motion for a few minutes and yet, my heart was set to race. Because as we got within eyesight of the railroad tracks, the 18-wheeler coming toward us in the north-bound lane had a blow out on the passenger’s side of the cab. And suddenly, the truck hit the gravel shoulder of the road at full speed. That’s when it got blurry.

My Jeep was pelted with gravel and I watched in amazement as the cab went further off the road and the trailer began to flip. Had the pick been going any slower, I feel certain the truck would have hit me! We both stopped as soon as we could and turned to a tractor-trailer filled with live catfish had spilled its cargo all over the highway and the driver of the truck had gotten out of the cab running! He was worried the truck would blow up and was high on adrenaline! When the cab stopped moving, he got to running. The cotton consultant in the pickup and I had trouble catching up to him to see if he was okay!

What came next surprised me and yet, I should have expected it. As other people came driving through the area, they noticed catfish flopping around on the highway and they started picking them up and putting them in whatever they had in their cars! I remember Wal-Mart bags clearly as people scrambled to reach fish without getting hit by cars. We called the cops and the company the trucker worked for, gave them each our version of the story and I headed down the road wondering if I should tell this story first or tales of Amsterdam. I think it depended on the audience!

To see other posts in the series of 30 days of daily blogging, just click on this image wherever you happen to come across it. There will be a little of this and a little of that in the series, just like there is in my blog at any time! You can also see a list of several other bloggers doing the 30 day challenge on this post by Holly Spangler.

0 shares
« Your Vote — I Want to Tell You How to Cast It In Tuesday’s Big Election (Day 3)
Bowling Is A Family Tradition I Never Quite Got, But Maybe I Could (Day 4) »