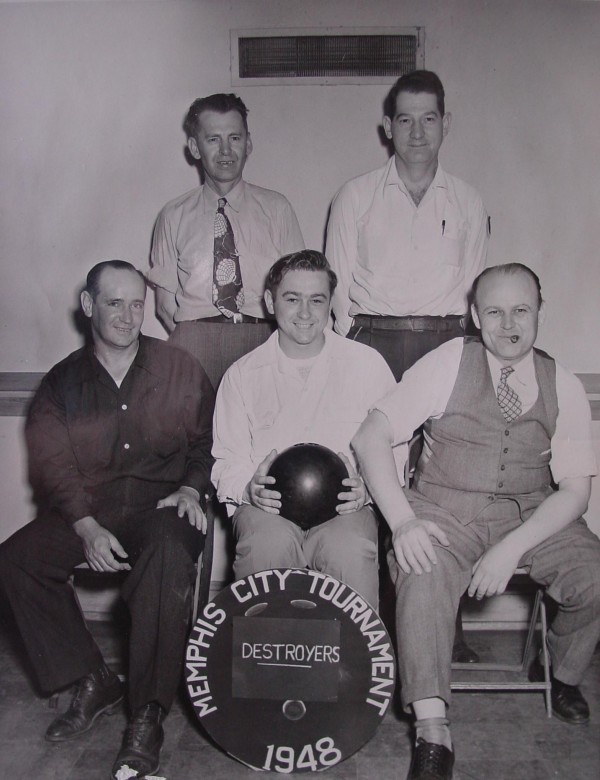 I’m not sure how I became one of the unbowlers of the universe, but it happened. And in some ways, it makes me a bit of a black sheep of the family. I grew up in a bowling family. My granddad was especially tied to the sport. This photo of his bowling team is one of my favorite family photos. 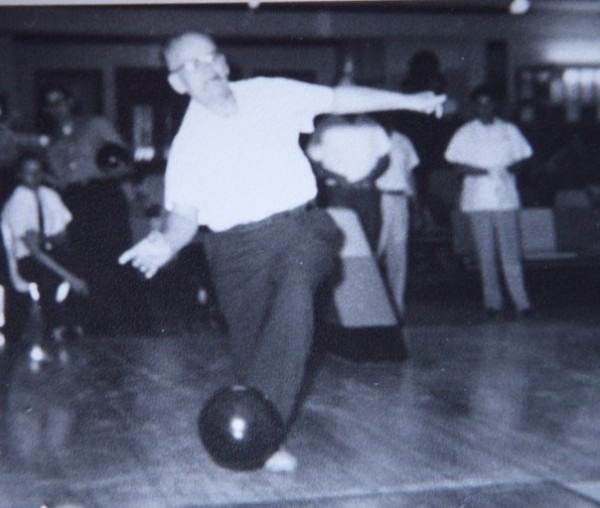 My granddad is the one who looks like a bit of a bruiser. LOL. That’s him on the front row, on the right with the ever present cigar in his mouth. I didn’t have a chance to know my granddad very well. He died when I was young — think it was second grade or so. But I’ve heard enough stories and seen enough photos to know he really loved bowling. And I can still hear his booming voice in my head as I remember early breakfast when I got to spend the night at their house…. biscuits were a must!

I mean check out this shot I found. For some reason it seems the digital version didn’t come out too clearly  BUT I think you should be able to see his zest for bowling (and you can also see the familiar cigar!)

But I do remember my parents bowling. Mom & dad were in a church league too. They used to go once a week to bowl. Had their own shoes and balls. And I vaguely remember my older brother and sister doing a summer league or something along the way, but I think I may have been too young to join. So most of my time spent in a bowling alley as a kid was watching other people bowl, playing with whatever other kids were there, etc.

Sure there were the midnight bowling parties, a bowl-a-thon maybe and the occasional birthday party held at a bowling alley. But for whatever reason, I didn’t really pick it up. And since I never really got into it, I don’t think I tried too hard at it.

I mean I think it is fine to do something just to enjoy hanging out with friends… you don’t always have to be good at something to have fun. But Saturday…. well, it was another of those events where I was invited as part of a crowd. This was the second time I was bowling with my office mates. Last time, I found out some of them are real bowlers like some of my family. Luckily, there were some others who were just a step above bowling with bumpers (like me). 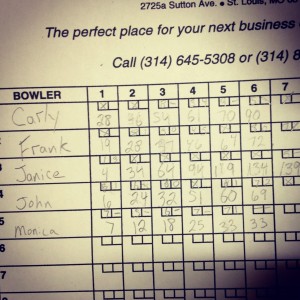 But bowling this time made me wonder whether I should try harder. See, the first game of the day, I did pretty well. In fact, it was the best game I have ever bowled. Usually I’m thrilled to break a hundred and somehow I did a lot better than that. I really couldn’t believe it. But I bowled five strikes in a row. Not the five gutter balls I may have done before. I was just having fun too. Wasn’t stressing out or anything and really couldn’t believe it.

Everyone was amazed but nobody was more amazed than me. When the streak came to an end, I took a photo of the screen and texted it to my big sis who has on occasion gotten me to bowl with her family.

I was left to wonder, is it possible that I’m not a hopeless bowler, just a person who has never learned to bowl the right way? Is it something I could enjoy getting better at? And then the real world came back and I bowled games where I didn’t get to 100. And the greatest part of it? I was still having fun. Guess it is the people you are with more than the ball that matters…. I can practice and maybe get more consistent on the score but good folks? That’s what would make it worth spending the time practicing.

To see other posts in the series of 30 days of daily blogging, just click on this image wherever you happen to come across it. There will be a little of this and a little of that in the series, just like there is in my blog at any time! You can also see a list of several other bloggers doing the 30 day challenge on this post by Holly Spangler