We all hear about climate change now and then. And I know this isn’t what they are talking about but it’s slapping me in the face today. I am in Memphis for the weekend and as I drove in last night and saw the temps were in the 60s, I smiled so big. I love the moderate temperatures! Then I remembered where I was flying to tomorrow.  These photos say it all: 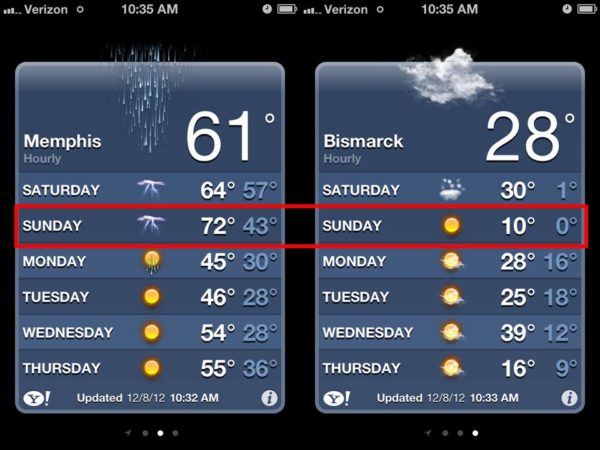 All of my friends know how I have sworn I wouldn’t go to North Dakota in winter, so just how the hell did I end up agreeing to go when it would mean a 60 degree temperature shift?

It’s the right thing to do. And its a business trip.

I was asked to come to speak to a group being assembled by the North Dakota Department of Agriculture about handling tough conversations in the social media environment. The headline of the article totally oversells my participation, but I am excited about being in the room with so many folks focused on agriculture! I am always up to a visit to focus on the farm and this one sounds especially interesting.

The morning meeting of the commodity councils is mandated by state law. Goehring said the success of the first commodity council meeting in 2009 led him to invite other agricultural groups, ranging from the large general organizations, such as the Farm Bureau and Farmers Union, to smaller, specialized groups.

“These groups share similar concerns, interests and goals, and they often represent the same producers,” he said. “It is an opportunity for them to discuss these concerns and to develop joint responses to the issues facing agriculture today.”

Oh, and don’t worry, I have some Ugg boots to keep my toes from getting frostbite and I doubt I’ll spend much time outside. It’s just a 24 hour trip so I expect to make it out alive. And while I’m there, friends Katie Pinke and Val Wagner promise to warm my heart so I bet I hardly notice the extreme cold. (Ok, not even I believe that that! LOL!)