There are people who through TV seem to have always been a part of your life but you rarely get to look behind the curtain so to speak, and see what kind of people they are. I have had the chance to meet various people through conventions or pure happenstance and I have to say that animal expert Jack Hannah has probably made the most lasting impression.

(Let me be clear, my love for BB King remains TOTALLY intact, it’s just I haven’t seen him in a more low key situation. I still hope to hang out with him sometime.)

Let me explain my encounters with Jack Hanna though before I get to the top 10. 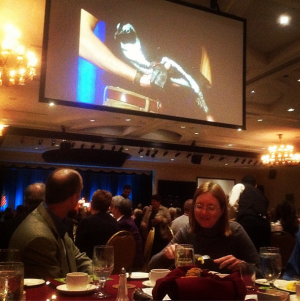 Obviously, I have seen him on TV for years (I am a Letterman fan). But last year in Hawaii he came to the American Farm Bureau meeting and gave talks in the trade show. I caught one of his presentations and thought that was nice.

This year’s Farm Bureau took it to the next level as I heard him do a longer, more personal presentation during a pancake breakfast on Sunday. Throughout the trade show I saw him doing his presentation too (my favorite part was the two-toed sloth – loved the fur and the fact it sleeps all day, afterall, I have a deep love of morning sleep). Finally, I saw he and his wife at the airport.

So now the top 10 which will shed more light on the encounter. Please know that I don’t know for certain Jack Hanna”s story, but these are things I have running through my mind.

I really encourage you to follow him on TV and social media. You can find Jack Hanna on: