Wow. I have had a really hard time getting my head around writing the M post. I was almost caught up on the series but let me psych myself out. I think I have it in me though tonight so I’m diving in head first (and hoping I finish before Scandal comes on! Alas, that didn’t happen but commercials helped me get this done! ) 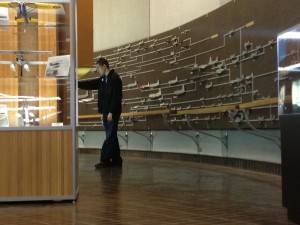 For years, I have been flying on MD-80s and other planes made by McDonnell-Douglas. I didn’t know much about the company, just that they were one of very few companies that have pioneered aircraft of various kinds over the years. For me, they were fairly synonymous with passenger travel. But after moving here, I realized that McDonnell-Douglas had been headquartered in St. Louis until it was purchased by Boeing in the mid-90s.

This fall I had the chance to step it up a lot since my nephew who is interested in being a pilot came to visit.

In the earlier days of commercial aviation, McDonnell and Douglas were separate companies, trying different things but the merged in the 1960s. When my nephew was here, we had a chance to see a really cool timeline of aircraft from these companies.  I mean wow they changed over the years! 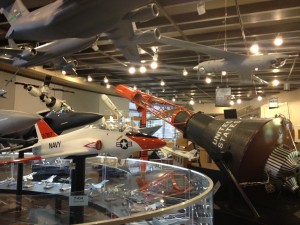 Growing to be large enough to carry several passengers, then dozens, then even hundreds. Kazu was soaking up all sorts of information on the various things engineers learned and tried. And I learned that they had also been involved in a lot of of the space program. How had I missed that?

Now, the facility bears the Boeing name and is primarily engaged in making military planes now. That’s pretty amazing to realize that people who may live in my neighborhood are making jets for the US military.

As I talked to St. Louis bloggers about what should be included in this series, I was surprised to have several recommend a museum I hadn’t even heard of — the Museum of Transportation. Now I’m thinking I need to go!

Looking at the post by Adam Sommer, seeing his son on the trains, in the back of a milk truck, alongside antique cars and more… that looks like a great place to take the rough and ready to go pre-schoolers but I have to admit it looks like lots of grownups would enjoy it too! Alyssa Holyfield Groeteke shows how much her sweet toddler enjoyed some of the exhibits designed for younger visitors. 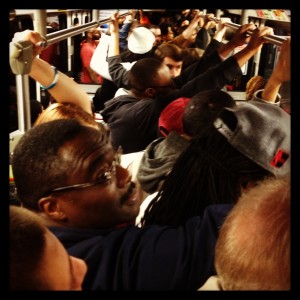 St. Louis’ commuter train service may not be known as well as the New York subway, but the MetroLink is a service that lots of us count on. Some commute on it daily but lots of us consider it our primary means of transportation for ballgames and other events.

In fact, on that same visit with my nephew, he and I went downtown to see a ballgame and the MetroLink tends to be the quick & easy way to go. But I have to admit, it was crazy crowded that night! We felt a bit like we were on a subway in Japan at rush hour!

St. Louis’ Children’s Museum is called The Magic House. I haven’t been but my friend Marjory’s K & A LOVED the Magic House when they came to visit. Marjory said there were so many things to do for a variety of ages… some science, some art, some physical activity… great place for kids.

I Can Do This!

The A to Z series about St. Louis is really getting to me this April. I had the best intention but life keeps getting to speeds where it is hard. Hope to catch up some this weekend. I’d love to know what I need to be sure are covered in upcoming letters or call me out for missing something in M or a previous letter! Check out last year’s posts in my A to Z of Agriculture — M was for moo. And you can browse a list of almost 2,000 bloggers doing their own A to Z Challenge.