The letter V in my St. Louis A to Z was a challenge I have to admit! Luckily, my friend Danielle from the office came through for me with not one but TWO things in St. Louis that start with the letter V but I have dragged my feet on this so much that one changed its name! Veiled Prophet is something I hadn’t heard of until I was in St. Louis a while and even then, I couldn’t really “get it.” On the other hand, the Verizon Amphitheater is now the Hollywood Casino Amphitheater.

I have to admit, not knowing much about Veiled Prophet, I turned to the internet to do some research. I checked out the Veiled Prophet (VP) website and found their mission pretty interesting. It reads:

The Mysterious Order of the Veiled Prophet is a 135-year-old civic, and philanthropic organization founded in 1878 to promote the City of St. Louis and enrich the quality of life for its citizens.  Its members, who choose to remain anonymous, provide financial support and leadership for various civic projects and not-for-profit agencies, produce the annual Fair Saint Louis, Celebrate St. Louis Summer Concerts and the Veiled Prophet Parade, and honor young college-aged women for their civic involvement at the annual Veiled Prophet Ball. 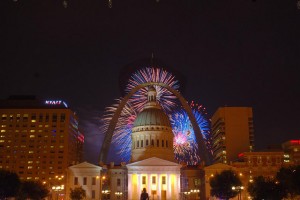 There are a lot of festive occasions that can be tied to VP — and a few years ago I had planned to go to Fair St. Louis to see Dierks Bentley and Colt Ford. But that was the summer when the weather decided temps in St. Louis should be the sort of things bakers count on! The parades and things that VP holds look like they involve a lot of fun. I mean a quick search of flickr showed incredible photos including this composite of fireworks over the Old Courthouse (by Tim Hamilton & used via Flickr creative commons)!

While there are lots of great pieces on the activities of VP, I kind of feel like I should mention that it seems that VP’s history can be a bit controversial. This video shares part of the story as it relates to labor movements in its early days.