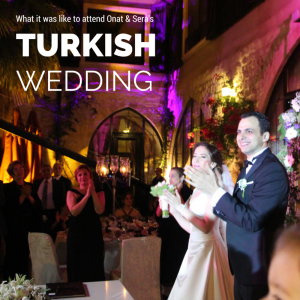 As I mentioned in a couple of the other posts about my vacation to Turkey, one of the catalysts for going was that a friend was getting married. I had said years ago I would come to his wedding and when he mentioned last summer he would be getting married this summer, well, I loved that I would be on the invitation list and couldn’t wait to celebrate with him, his fiancée and their families and friends. I wasn’t sure exactly what I was getting myself into, but I knew it would be fun!

In the US, I’m pretty accustomed to the entrance of the couple. Whether the wedding is a religious or civil one in the US, we usually have half the wedding party & officiant up front waiting for the others to arrive. I’ve seen weddings in a couple of other cultures and learned to just roll with it…. can always get explanations later! Granted I wasn’t sure what to expect (though I did confirm that the clothes I brought would be ok before I went) so the camera wasn’t always ready but that’s ok too.

We were in Antakya (Onat’s hometown) which is in the furthest south area of Turkey called Hatay. The city is close to the Mediterranean Sea. Although it was pretty warm in the day time, as the sun set, and breezes came through, it was perfect to have the wedding outside in a courtyard. The colors of the sky eventually faded behind the palm trees and lighting kept the colors popping throughout the night.

The courtyard featured a fountain in its center and tables along each of the long sides. At one end was a large gate opening and the other had an archway and table where the ceremony would take place. And lots of room for dancing which would be important throughout the night.

As we all entered the courtyard, the families were there to greet us. The joy bubbling over as you could hear laughter from family and friends finally catching up. And perhaps the clearest illustration of unbridled joy was children running and dancing emitting squeals of absolute glee. There was a multi-course dinner, much like the New York and New Jersey weddings I have been to in the past and the food was yummy — especially all the desserts! 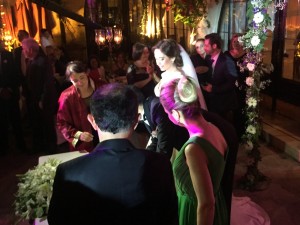 A favorite part of weddings is the moment when you see the couple for the first time. You see the joy on the faces. Well, in this wedding the music reflected and even heightened that joy as Onat and Sera sort of danced their way in a bit with all of us clapping along.

Once they reached the archway where they would exchange vows and sign their marriage license, with a couple of dear friends as witnesses. The family was seated up near the area where the ceremony would take place and I was lucky enough to be sitting right up there with them. It was a bit different from most US weddings in that each only had one person with them and I couldn’t help but ask who the witnesses were because they hadn’t been among the immediate family I had met. That’s part of the process. You need to get others in the community to stand up alongside you too. The wedding ceremony itself was relatively short, like many others I’ve been to, but the night would have a lot of fun! You can see some of this in the opening clips of the video embedded below. 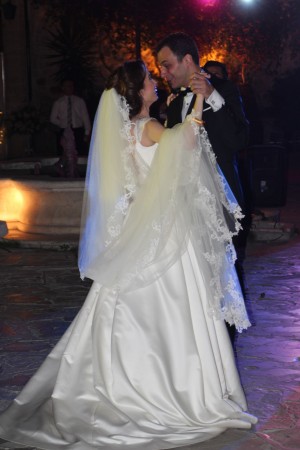 Onat and Sera’s first dance was a song that frequently gets receptions underway — “At Last” by Etta James. And I have to share this extra photo of the little girls looking at the first dance…. it just seemed so magical to them! 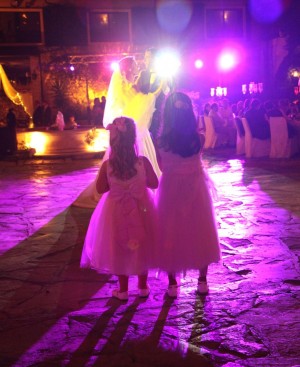 But most of the music through the night was Turkish pop with a great dance beat! Granted I didn’t know too many of the lyrics, but that didn’t matter much at all.

Everyone seemed to dance for hours and Sera and Onat seemed unstoppable, making time to dance with everyone over the course of the evening!

One part of the dance that was definitely different from any I had been in the US was the part where local musicians came in with traditional instruments. Everyone definitely got into the act with Onat and some of the cousins even taking over on drums for a while! It was so much fun — you will need to watch the video to get a feeling for it! 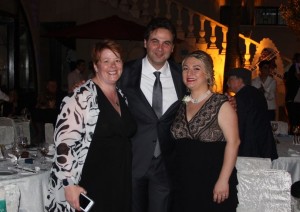 I can’t let this go without proving I was there (though you will probably hear my voice a bit in the video) and showing the dear friends I went with — Onur and Burcu. They have been friends for years and it was so nice to see this important part of their family and culture live and in person. Hope they and the rest of the family know how much I appreciated the hospitality. It certainly was a once in a lifetime adventure. I want them all to feel free to leave comments and help me put in some of the details I may have missed or gotten wrong!

0 shares
« Bad things happen in threes? What happens in fives? VIDEO
You Can Learn A Lot from a Hot Air Balloon Ride (Video) »