If you’ve made it to mid-July without attending a wedding, you may want to check and see what’s going on in your world. It seems there is always a wedding to catch in the summer. I had two really different weddings in the past month or so and thought since I had video of both, you may enjoy checking one or both out. 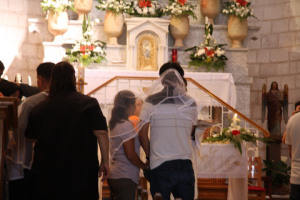 While we were in Israel, we went to Cana. The name of the town may not mean much at first glance, but those of us who spent summers going to vacation Bible schools or church camps remember the story of a wedding where the hosts ran out of wine and Jesus performed a miracle, turning water into wine. It was actually the first miracle Jesus performs in the Bible. There is a Franciscan church in the town now & we held a mass there. (See more info & photos here.)

With that in mind, the tour offered the couples in our group a chance to renew their vows. Quite a few took them up on the offer including my dear friends Albert & Geeta. Now for Albert as a Catholic, it was something of great meaning. For Geeta, not being familiar with the parable, it was a bit more confusing why everyone was suddenly deciding to renew their vows (they’ve been married 10 years or so) but she went along with the wedding.

It was fairly spontaneous with the priest telling people that morning after the bus was rolling that we would be in cana and he’d be glad to include any couples, just to get him the names. The church was beautiful — additional flowers were not needed. The nuns did bring out netting & cords for the service to be used as a visual support for the practice of binding couples together. The church, music and symbolism was very moving.  There were lots of laughs as the group gathered and later in the day as one bride realized she had lost her husband (left behind at lunch but soon found).

The video is a bit long (I think the rest of the group that was there will enjoy the full thing) but the priest begins the discussion of the wedding 11 minutes into the service.

Cana was one of my top 20 Biblical sites on my trip in large part due to the ceremony renewing vows. 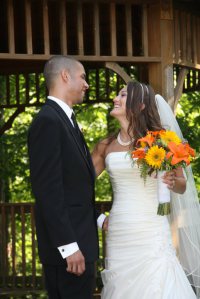 What the wedding in Cana lacked in planning was more than made up for with the wedding I attended in St. Louis recently. 🙂  In college, I had the chance to become part of a family for several years and while we don’t touch base too often, when we do, it is like no time has passed at all. Casey was a baby girl when I started staying at the house & helping care for them when my friend Cindy would travel. To see her now, all these years later getting married in her dream wedding (that was very well planned and executed) was a real gift. And I was able to participate in several elements of the wedding weekend.

Casey & Greg’s wedding involved lots of planning. Getting friends and family together from both coasts, the north & south. It was held at the Quail Ridge Park Gazebo and Lodge in Wentzville, MO (a beautiful venue I must say!) There was a great rehearsal dinner on Thursday, a fun gathering with the bridesmaids Friday and finally the wedding on Saturday evening followed by a dinner reception that spurred lots of laughs as well as tears of joy.

I hope you’ve had a chance to share this sort of joy with friends & family this summer. Would love to hear about weddings you’ve attended.