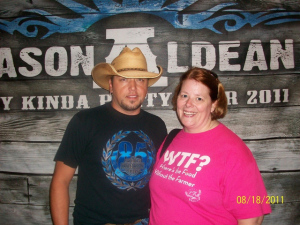 Recently, I had the chance to go to see Colt Ford and Jason Aldean in concert. One of my closest cousins — Lisa (@LisaSmoot) lives & works in the music business in Nashville so she was able to get us back stage for meet & greets with the artists. The concert was at the Snowden Grove Amphitheater so I decided to dress for the 100 degree weather rather than going all out. And I thought I could make a statement so I wore my “WTF? Where’s the Food, Without the Farmer” shirt from I Love Farmers… They Feed My Soul. It was clear… other people there thought they could make a statement too its just the content was different.

Since my cousin works pretty closely with Colt Ford (Blog, Twitter, Facebook, YouTube), we had a few minutes to visit with him. She introduced me by saying, “This is my cousin Janice and she works with farmers a lot.” He immediately looked me dead in the eye and said “ya’ll do a great job.” I know I needed to pass it along. 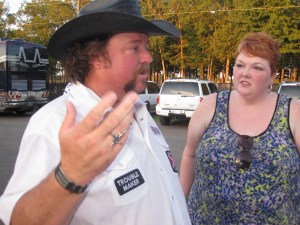 Later, I had a chance to meet Jason Aldean (Blog, Twitter, Facebook, YouTube) too. It was really fast but I’d like to think the Georgia background makes both of these guys a little more likely to know what farmers do. And if you listen to their music, I think you’ll find they really do. Colt has written a number of songs that speak to my years in the small town of Benoit, Mississippi and I think that’s because he knows what it is like to live in such a small town alongside the men & women who produce our food, feed and fiber. His song “Dirt Road Anthem” which both of them have recorded,

During the concert, Colt did a great version of “Country Thang” and introduced it by asking the audience if there were country guys & girls in the audience. When they screamed the yes reply, Colt told them to be proud they say “yes sir” and “no maam.” And then he launched into the song:

Shotgun shack on the edge of town
It’s where I’ll be when the sun goes down
Big money, bird dog barkin’ out back
Wouldn’t trade him in for a Cadillac
County wanna pave my old dirt road
Went to the courthouse, said “Hell no”

Known my girl since she was fourteen
She’s the first runner up to the Hart County Cotton Queen
She was raised on cornbread, purple hull peas
She turns ’em heads at the feed ‘n seed
She rides in the middle of my four-wheel drive
Got a honey hole way back in the pines

It’s a country thang, barefoot and crazy
Fried green tomatoes and sawmill gravy
Takin’ pride in workin’ hard for a livin’
Pray before meals, it feels good givin’
Back to the needy, greedy’s not us
Thank God for it, even if it ain’t much
That’s how we does it down here in the mud
What else can I say, y’all, it’s in my blood

0 shares
« Good Barbecue, Good Byes, Seeking Refuge in My Guest Room
Mourning the Death of a Family Member from a Distance »