This week has been filled with stresses.

Traveling up until the last minute when I had to get home so the movers could come and pack me up, may not have been the smartest thing, but the results of the AgChat Foundation Conference will be felt for a long time. The enthusiasm I picked up from the 100 or so participants, will no doubt power me through lots of blog posts, tweets, Facebook posts and videos! So much so, I sounded a bit giddy when I talked to Ray Bowman with Food & Farm about the AgChat Conference.

The movers…. they are simply awesome. Leo & Shaun are new friends. They are making the trek as stress-free as they can but there are other things. First, simply getting a cashier’s check that big can make you lose your breath, there are all the things like boxing up something to be returned, making sure you’ve checked off the change of address info and all those other things. But those things are melting as I’ve plugged in my iPod at a new house and been doing things like covering pantry shelves and having rooms painted. 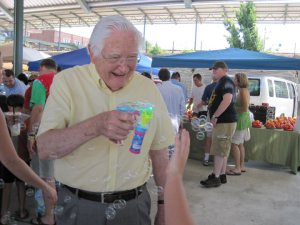 Of course, saying goodbye (really so long) to friends and family is difficult even though I know I’ll be back in Memphis often and many of them will be visiting me in St. Louis. But to be packing my house as a dear family member had an accident, one which proved to be fatal, well, that was not anything I could prepare for. I had the chance to say goodbye to him in the hospital and while he may not have responded, I have a feeling he knows. The family was gathering before I left as we knew his time was short and I am so glad I got away to visit over a bite of dinner.

I may be getting ahead of myself but have to tell you, he was not a family member on the conventional family tree. And I have to admit I sometimes stutter when people ask how I’m related. None the less, he was definitely family. I loved Charles Woodall as did lots of other people and with great reason. My reasons and interactions with him were definitely unique and since I am in St. Louis while the rest of the family is gathering in Memphis, I decided I could tell some of my Charles stories here to share with those of you who may read the blog post whether or not you knew him. If you’d like to read the obituary they did on Charles Woodall, it has a more formal nature… one Charles had at times (especially as Reverend Charles Woodall), but the zest for life was obvious too and that’s what I want to focus on.

He’s been a great dad to Jimmy, great father-in-law to Cheryl and the granddaddy who would take my nieces to Huey’s to blow toothpicks into the ceiling as well as make sure they got their first glimpse of a panda bear. And to me, he’s been a great member of the family, even if I’m not sure how you would want to label it. I’ll just call him Charles, sometimes refer to him as dad or granddaddy.

So tomorrow as I unpack boxes as the movers bring them in the house, I’ll be looking through memories, many of which are connected back to this great man. I’ll miss being with the family but I know we will be celebrating Charles’ life for a long time to come. And I’ll take a drive with the top down to let my spirit fly. I’m pretty sure that will bring a bit of light from above as Charles will no doubt have to smile as he sees the wind whipping through my hair. Who said you can’t pick your family? I’d say Cheryl picked pretty well!

If anyone else wants to add stories about Charles (Rev. Woodall, Granddaddy, etc.), please do! I’d love to be able to be part of the celebration of his life even if I am several hours drive away.

0 shares
« Colt Ford on Farmers: “Ya’ll Do a Great Job”
Taking Care of Things During A Long Distance Move »