I was born and raised in the Volunteer State so I would like to think I know a little about volunteering. I’ve been blessed to have a lot of opportunities to volunteer with various organizations that cover various social services, the performing arts, and more. And I’d like to think I’d roll out a red carpet for some volunteer willing to work on my flower bed. There is a good bit of ivy I’d love to have disappear. There are a few plants that need a bit more tender loving care than I have offered too. But the volunteer that is taking over my flower bed was unexpected and never asked what I was interested in.

For those who are scratching your heads on the idea of a volunteer plant, the definition wikipedia offers is pretty good:

In gardening and botanical terminology, a volunteer is a plant that grows on its own, rather than being deliberately planted by a farmer or gardener. Volunteers often grow from seeds that float in on the wind, are dropped by birds, or are inadvertently mixed into compost. Unlike weeds, which are unwanted plants, a volunteer may be encouraged once it appears, being watered, fertilized, or otherwise cared for.

Volunteers that grow from the seeds of specific cultivars do not reliably “come true,”[clarification needed] and often differ significantly from the parent. Such open pollinated plants, if they show desirable characteristics, may be selected to become new cultivars.

Since I’ve worked in agriculture so long, I have heard a lot about volunteers. I’ve seen them in fields (corn coming up through someone’s soybeans) and along the road (My friend Ray Prock even pointed out some volunteer cotton to make me feel more at home in his neck of the woods). I’m used to thinking of volunteers as total pains for farmers rather than the curiosity source I’ve let this become. Most volunteer plants in crops offer  problems like taking water & nutrients from the planted crop, a hassle for equipment in the field and definitely an eye-sore. But this, I didn’t expect.

A few months ago, as spring came to my new house, I took a bunch of pictures and asked friends to help identify the plants. At that time, I don’t think the volunteer had emerged. I saw it quite a while ago and figured it was something that had grown from a fall pumpkin or squash, but didn’t think much about it. Over the past couple of weeks, it has been growing like crazy! And my curiosity has gotten the best of me. I check on it every couple of days. It is really getting big….. with those leaves being enormous! 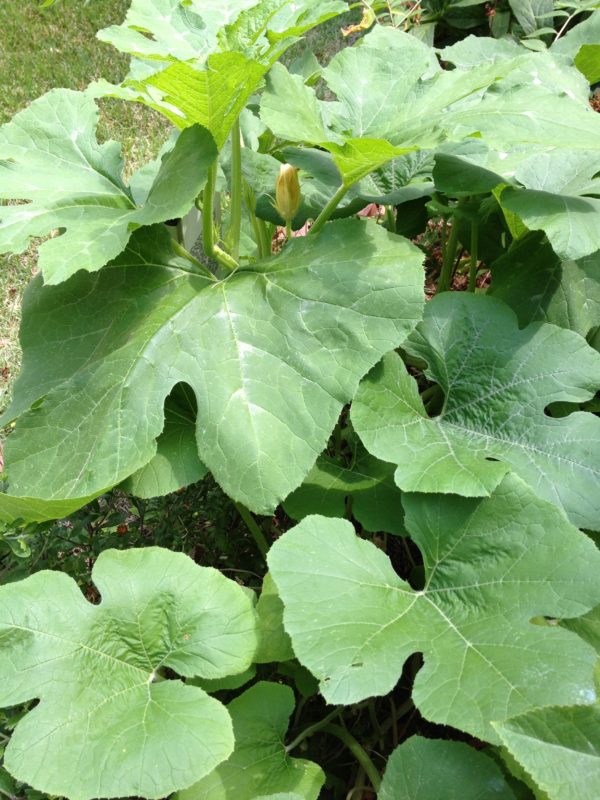 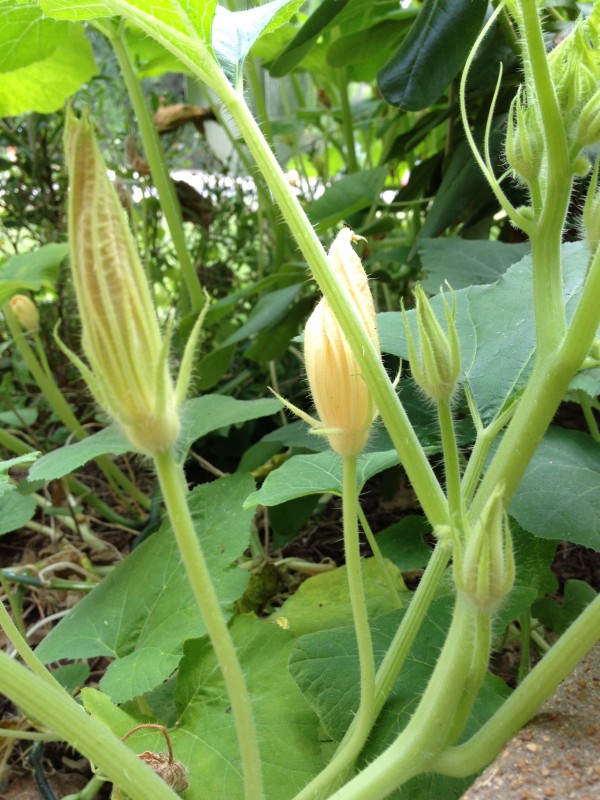 Is this something I had on my porch last fall? If so, that is very interesting because I had mulched before the whole Halloween and Thanksgiving fun so I think seeds would have been sitting up on top of mulch. Did the folks who owned the house before me have something out there? Did a seed get dropped here by a bird or that bunny that shares my yard?

If this plant grows so easily as to sprout from on top of the mulch in the shade without me watering it, I want to take it into my office for testing! (Please note, I’m joking. I can only imagine how people at my office would react!)  Just the same, I’m thinking some vegetable farmers would love to have something so hearty growing in the field! And given my experimentation with a raised bed and growing some veggies, I have to wonder about its productivity since there the blooms seem to outnumber the tomato plants I’ve been spoiling! I’m betting its an ornamental squash, gourd or pumpkin and not something tasty though…. which may be just fine!

Have you ever had volunteers take over a flower bed or garden?