I’m not sure if anyone who regularly reads my blog knows but July 11 is World Population Day. Although I usually focus on things about farm and travel topics, and talking about World Population Day may seem a pretty odd topic, it fits in perfectly to me. 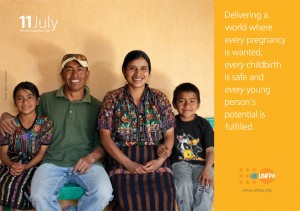 World Population Day is one of the programs of the United Nations Population Fund (UNFPA). As an international development agency that promotes the right of every woman, man and child to enjoy a life of health and equal opportunity, there are several areas of focus. UNFPA supports countries in using population data for policies and programmes to reduce poverty and to ensure that every pregnancy is wanted, every birth is safe, every young person is free of HIV/AIDS, and every girl and woman is treated with dignity and respect. The headline on the PSAs for 2012 World Population Day is the vision “delivering a world where every pregnancy is wanted, every childbirth is safe and every young person’s potential fulfilled.”

We spend a lot of time talking about how we are going to feed ourselves and communities. We know that the world’s population is growing and the demands for food, feed & fiber are increasing. At the same time, agriculture is working to increase food production but we need to stop and think about whether or not the Earth can handle never-ending population growth. And my personal thought is that although our farm productivity and resource conservation can and should continue to make improvements, we can’t count on that alone to solve the complex problems facing us.

Some of the facts and figures the UN posted really stunned me. Did you know that:

These numbers frighten me but in some ways they are still so familiar. While I have lived in some of the medical rich places — Memphis certainly has a lot going for it with St. Jude, UT Medical, the Med for trauma, Baptist system, etc.; White Plains, NY was able to tap into the New York metro system and my new home of St. Louis seems on top of it – heck a friend came all the way from Turkey to study here! But I also lived in one of the poorest areas of the country and the medical gap was obvious. In fact, for a while, there were no obstetricians within two hours. And although there were hospitals in the area, friends regularly made agreements that people would be sure any significant accident would lead to transfer to Memphis of Jackson 2.5 hours away and we all got accustomed to the multihour drive when friends were having surgery. So good pre-natal care was tough there too and that was in the U.S. so I can only imagine in places further afield.

We will forever have people living far from major cities, but we need to find ways to get good information to them. Information about taking care of a woman’s health while she’s pregnant and about how to make choices for families. I’m not advocating for forcing people into contraception, etc but helping people access it…. that can help in some families and communities and over time, that can have a real impact on the global population growth. To learn more, check out UNFPA on their website, Facebook, Twitter and YouTube.  I’m not sure what can be done beyond awareness and support of programs, so if you know of ways to more directly be involved, please feel free to share in the comments.