The post I wrote about my visit to the J-M Fresh mushroom farm was getting so long, that I decided to put some of the other things I learned about growing mushrooms while there in this separate post. Some of the things I learned were just general information and some was specific to J-M. 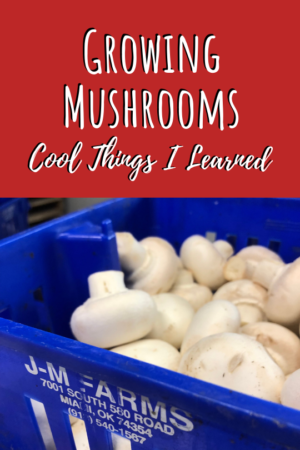 If anyone has other questions, please don’t hesitate in dropping them in the comments as I’d be glad to followup with Terry to get answers!

Food safety is important on the farm

Seriously, I could totally smell mushrooms when we arrived. Sure you can smell compost too but wow. It made me hungry.

Why do some mushrooms have more texture on the cap?

The texture you see on mushroom caps at times is called scaling. “Mushrooms are delicate. The scaling is done by humidity and airflow. You don’t want too much air blowing across them.” 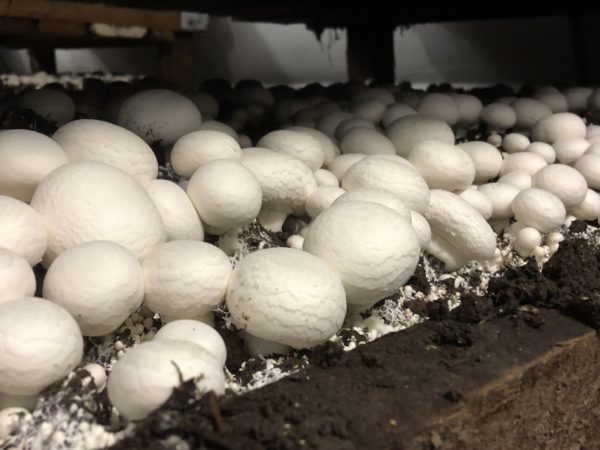 Where are most mushrooms grown?

There are two counties in Pennsylvania that together produce 60 percent of the mushrooms grown in the US.

Why are the Jurgenmeyers growing mushrooms?

Terry’s dad was with Ralston-Purina in the food space and he had shifted roles in the company a bit. Ralston decided to enter the mushroom business and put Mr. Jurgenmeyer on it. They flew him around the world to learn and he started several different locations for the company. Once they moved him to the corporate office in St. Louis, he realized he wanted to be out on the farm not in an office and retired. Mr. McLain (the M of J-M) was another regional manager and the pair quit the company and ended up starting their own farm.

How did the Jurgenmeyers pick Miami, OK?

I love hearing about how farmers chose the land they farm or crops they grow. Granted, many farmers are multi-generational, but Terry remembers his dad leaving the corporate job to start the farm. The J-M duo got in a vehicle to drive down to Claremore, OK to check it out. When they stopped in Miami to get gas, they got to talking to a guy there at the pumps and he was like a one man chamber of commerce and welcome committee!

“The big things you look for in mushroom production is you have to have very good utilities — water, electric and natural gas. And they had it all in Miami, OK.” So a few months after misters Jurgenmeyer & McLain retired, they broke ground on the new place.

Terry works with his brothers Curtis and Pat, all three have their own fits with the business. Curtis is incredibly analytical. Listening to Terry talk about him, I feel certain Curtis is the kind of business person that would help me. Very detailed-oriented and helps find improvements others may overlook. Pat is the younger brother and is more extroverted. Pat is a great visionary that can really help think through growth. Both of them have served on the mushroom council and some of those things. Terry is the mechanical mind and loves figuring out how to improve processes. 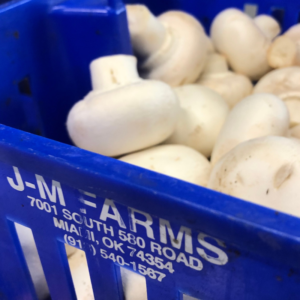 Where does J-M Fresh sell their products?

Since mushroom farms typically have a region they cover, he said they sell in a lot of stores throughout the plains and a bit into Missouri, etc. There is another mushroom farm in Illinois, and one near Houston, Texas. Sometimes the packages say J-M Fresh and other times the product carries a branded label for a store or something.

How many people do they hire?

J-M Farms has 500 employees and it is year-round rather than seasonal. With all the machinery and all, you can understand why they had a mechanic that could help take a look at my car. In fact, they have several!

How many mushrooms do they grow?

J-M has a few satellite farms near their compost production & nursery facility. Working virtually every day of the year, they produce about 5 million pounds of mushroom on each site.

Biggest changes on the farm?

The farm has seen a lot of increases in technology and scale in growing mushrooms. They are always looking for ways to do things better. One thing they are looking at is moving from the wood tray based system they use right unto netting and aluminum. Those new shelves will tilt, making it easier for employees to harvest. There will be some mechanization added and Terry is really excited about it. It sounds simple but Terry things it will be more environmentally friendly and possibly save on labor. He says they are committed to their employees but it is really hard to find new employees in rural areas and regulations have made it harder. 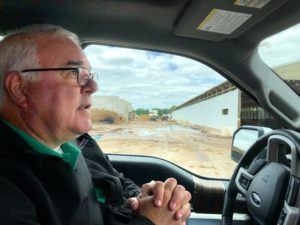 He laughs and says “on a steak” like with a bernaise sauce or something. That’s when I find out Terry also has a commercial herd of cattle some angus and charlais. He also has a personal herd.

If you haven’t already read the post describing the way the J-M Farms grows mushrooms, give it a go. And like I said, if you have more questions, feel free to ask.

2 shares
« A Mushroom Farm Visit is a Totally Different Farm Experience
Remember your first boombox? Memories May Be Coming to Life (ad) »

This blog is part of the communications efforts by JPlovesCOTTON LLC.
2 shares