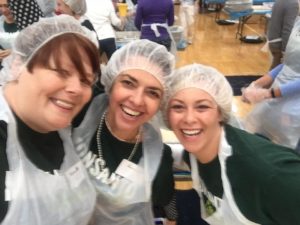 The phrase feeding the world always makes me stop and wonder. It is such a mammoth pursuit. A massive goal that needs to be tackled in in more ways than I can count. Such a daunting task that it is hard to see progress. And yet Friday, in support of World Food Day, I had a chance to feel like my colleagues and I had a very specific contribution in helping some people in Tanzania.

Let me tell you a bit more about it.

We were asked to get there 15-20 minutes early for our noon shift but knowing I had colleagues on the 11 am shift, I decided to get there extra early so I could snap some pics before I started work. Really glad I did because there was absolutely no time for that once we started assembling meals!

Checking Out the Vibe

As you can see in the video download from my JPlovesCOTTON Snapchat, there was a fantastic vibe in the room! I wasn’t sure what was behind the curtain from where we were lining up, but once I got back there, wow. 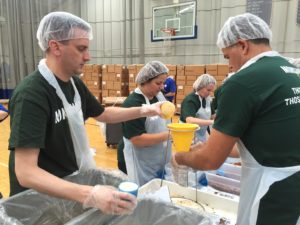 There were 25 tables of people, with most tables having 10 people at them. Music, the kind that really pumps you up, was pumping on the sound system. And there was a combination of focus and fun being had!

Now and then, an emcee would get on the microphone and do shout outs to the various businesses, schools and other organizations who were packing. Frequently tables would erupt with exclamations as they heard their names. And some of the Monsanto team did similarly as I came by. A couple of friends even stopped what they were doing for a selfie!

I was pumped and had to tell colleagues we would take this up a notch (someone may have mentioned I am a bit competitive. LOL.

As our groups were led in for the noon shift, we were all focused on listening to the volunteer who was telling us the ins and outs of things. She was making sure we knew exactly what needed to go in each bag, the exact order and the reason order mattered. Guessing they know some of us like to change things and good reasons meant any variation in the process was just an isolated mistake on our part. We decided we would have someone on each of the various pieces and realized we would be standing shoulder to shoulder for an hour or so.

That’s when one of the shift leaders asked if someone from our team would start the hour! I gladly volunteered having no clue what I’d end up doing. LOL. I was so pumped to not only be able to say how awesome the noon crew was, but I got to bang a gong! Shawn snapped photos but I haven’t gotten them yet. 🙁 Will get them this week I hope! 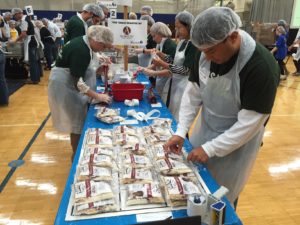 Our team looked for efficiencies throughout the process and moved a few folks around, changed what some of us were doing. In general here’s the process:

Throughout the process, our ingredients team and scale team was providing feedback on where we were with weights. Now and then we hit dead on the goal and hooting and hollering would follow.

Frequently, a great song would come on and that would lead to singing and or dancing.

We had little mishaps…. Handoffs of a bag resulting in almost losing a food service glove. A bag not quite in place on the funnel so ingredients ended up unused. Something going in before it was supposed to — the order meant ingredients would keep the vitamin pack away from the heat seal and rice was to be last because you wouldn’t want to lose beans, veggies or protein!)

Love that we were able to track the contribution of our team. We packed 8 cases, there were 36 packages in a case and 6 meals in a package. That means the 10 of us were responsible for assembling 1,728 meals IN AN HOUR! 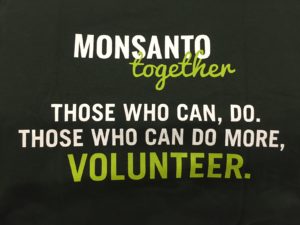 Granted, part of our productivity stemmed from all we needed to do was say we need more rice or whatever and companies like ours had sponsored that and other volunteers were on it to keep supply moving.

Happy to remember that as we mark World Food Day today. If you haven’t taken time to help make a difference in the world food system, feel free to get started. I love working for a company that is focused on working with farmers meet the challenges they have….. Appreciate they also take time to be sure we can see the difference in such tangible terms at times too.

0 shares
« What Makes a Crowd of Southwest Airlines Employees Get Loud?
That Time I Was in a Chinese GMO Documentary Video »