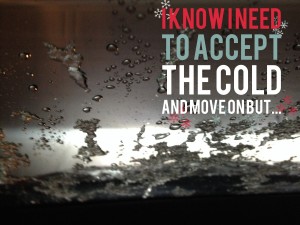 A couple of weeks ago temps dropped and I have to admit, I was surprised. I was in Kentucky to celebrate a friend’s wedding and kept thinking how badly I wanted my gloves. But the weather quickly normalized and I repressed the fear of a harsh winter. After several days this week of truly frigid temps, and a day that included snow, I can’t help but dwell on the cold. Yes, I would probably be happier if I accept cold.

Yes, it is cold. And yes, I know that it is one of the basic tenets of recovery to acknowledge that  I am powerless and things have become unmanageable. So this is my looking at the weather and seeing whether I can move on. What are some of the things that are coming up time and time again as I glance out the window or as I open the door.

Sure, there is no set date for when it can get cold but it is November. That is solidly fall. Winter doesn’t start until December 21. That’s more than a month away!

Average Would be Preferred

I would love to have warmer November than normal but average works. Whatever happened to average? According to the Weather Channel’s website, St. Louis’ average high in November is 56 degrees and the average low is 39 degrees.

This Doesn’t Bode Well for January

The Weather Channel is also nice enough to tell me that January is typically the coldest month of the year. Temps usually drop slowly from November to January with brief periods of warming but the trending down is clear.

I Didn’t Have Enough Time to Recharge

The last snow in St. Louis was March 25, 2014 according to the National Weather Service. I know, that was seven months ago. You’d think I could have focused on recovery and gotten through it HOWEVER, you need to remember how brutal last winter was! We had polar vortexes and lord knows how many days temps were below freezing.

I Need to Accept the Cold & Move On BUT I Hate the Cold!

I actually feel like saying I hate winter could be an understatement after last year. I didn’t even know how much I could hate winter. I tried to take most of it in stride last year. I posted my favorite snow day recipes — crock pot red beans & rice and snow ice cream. I got friends to give me tips on surviving extreme cold and took action.  I even stepped up my A game this summer and bought a long lamb’s wool coat that is lined with Thinsulate!

I thought I would be ready when winter came around. 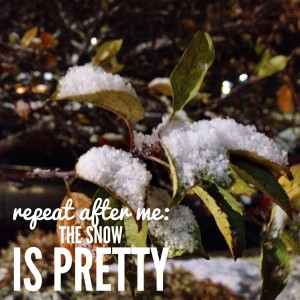 I wish I could look at the snow gathering on my windshield or on the trees & grass with a sense of wonder. But I’m just not there yet.

I have to admit, I feel a bit like a whiny kid (yes I thought about screaming “but I don’t like the cold!” I have complained about the weather too much this week. So maybe for the coming week I can just take it a day at a time. Stop thinking about how cold January may be. Instead, think about how it is likely to warm up some for at least a few days. And on those warmer days, I should make sure I enjoy them.

And when it snows, I will try to focus on how pretty it is not just how cold it is so repeat after me…. the snow is pretty.