This weekend I was at a blogger conference called Blogalicious and had the chance to meet several awesome people. One of them Roni is from Charlotte, North Carolina and while we were in a masterclass on pursuing your passion for profit, I realized we shared a passion for travel!

This morning as I was catching up on some follows and connections I wanted to make on social media, I followed Roni’s Twitter account and saw this question. “Have you ever been on a flight where someone needed the paramedics called?” Maybe she’ll write something up for her site the travel guru 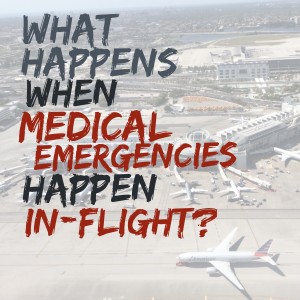 I couldn’t pass it up. I had to reply, in part because I can remember how unsettling it had been to witness in flight medical emergencies.

As most of you know, I travel a lot so sadly I have seen bad things happen a few times. Most of the times things go well, sometimes there are long delays or annoyances but occasionally there is something that really goes wrong. Each time I have seen the best in people surface. I will share a few times with you….

First time I saw a serious medical issue surface was on a flight home from overseas. This episode sticks with me so clearly because it involved a family (older parents with adult children) who I had been chatting with as we checked bags wondering how heavy they had become. You know how a two-week trip abroad results in adding a few things to your bags….

The dad had a problem somewhere mid-flight (I swear I think we were over Greenland or something!) and they asked for medical personnel on the flight. There were several thankfully and the crew notified us we may need to stop in Nova Scotia or Boston.

At a couple of times during the flight, they asked if anyone on board had this or that. A few nearby passengers were moved & they tried to provide some sense of privacy. Periodically I would see one of the children…. and our eyes would lock… my eyes well up with tears just remembering how concerned everyone was. I guess the doctors/nurses decided we could proceed to New York but upon landing they asked us to wait.

There were a lot of prayers said that day. One of the kids said they thought he would be fine as they left the plane walking past me, I still cling to that with such hope that this is a story that ended happily and that flight was years ago.

More recently a woman on a flight had problems. Not sure if it was a mild stroke or seizures but again there was quite a bit of concern and the flight crew was wonderful in caring for her. I think the seizure may have occurred while she was in the forward restroom because I hadn’t noticed her go in but I noticed a lot of activity with the flight crew later and they pretty much had to carry her to her seat.

Again the call was made asking for medical personnel.

She was only sitting a couple of rows ahead of me and she seemed very frightened — as you can imagine. She also seemed a bit confused (she was crying saying she didn’t want the paramedics to take her). The passenger across the aisle held her hand and did her best to comfort her as we landed.

As I left the plane, I had to tell the flight attendants I truly appreciated their care for her. It was truly heart-warming.

Could It Have Been Avoided?

Another in flight medical issue I witnessed once before I go…..

Once as I was waiting for my flight in Oklahoma City, a flight landed on an emergency from Dallas to Chicago. I later understood from the gate agent that the flight hit some unexpected, but fairly significant turbulence. One passenger hadn’t kept his seatbelt buckled and though he was in his seat, the turbulence was so strong he hit his head on the luggage bin above him. They were very concerned about potential spinal damage & landed at the closest airport.

I tell this story because it has kept me in a seatbelt whenever I’m in my seat on flights for years. 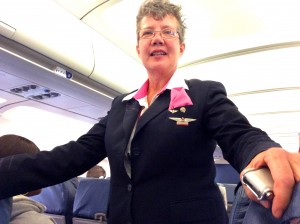 Both of these major events happened on Delta (lord knows I fly them enough!) and I appreciate that the training kicks in when needed — remember flight attendants are really on-board to help with safety, emergencies, etc and that serving snacks is a hospitality thing added to their job descriptions later. But I also noticed something else, the compassion was also evident both times I witnessed. They took care of the passenger, tried to help family or passengers nearby relax, etc.

As much as I travel, I see passengers taking everything for granted. Those things that annoy some of us (seat backs upright and tray tables closed) are for our safety. Sure, it is rarely important that you have complied with it, but you never know when it could be important.

From a passenger standpoint, I try to just do what is asked, when it is asked, even if the redhead in me wants to roll my eyes a bit. You may not be thinking about what if ______ goes wrong (it almost never does & most of us have gotten past a fear of flying) but that is the flight attendant’s job. They have a job to do to help the rest of us deal with the “what ifs.”

Remember these are the folks who could be your first-responder in an emergency. If an emergency happens, if you can be helpful, do. If you don’t have medical expertise, just being understanding, getting out of others way and channeling best thoughts to those dealing with a terrible stress is helpful.

Oh, and to be clear, I really appreciate the drink and cookie, pretzels or peanuts…. I tend to need those in the flight a bit more often than the first responder mode but I do get that it is a nice to have not a need to have.

Have you ever seen or had an emergency in-flight? What happened?