The fact that I don’t like the cold is so well-known that it is a joke with friends. I prepare for the cold pretty seriously and I worry about having to walk on ice. When temperatures in St. Louis drop low, the hashtag #ihatewinter is bound to come out. And this is the first weekend of bad winter weather. Yesterday is when it started and it continued through the night. By midday though it was in the mid-30s and traffic was steady. I decided to run a couple of errands knowing it would be in single digits tomorrow.

Shortly after I went out though, I realized the rain was freezing. I decided I would go just one place and head home in an hour or so. When I came out of the store I was excited to see things were still wet, not icy and I decided still to head home rather than playing the odds of staying out while the weather continued to get worse.

The drive home… I stayed slow but it was an easy drive. No traffic, no accidents along the road, no slippery places. I breathed a collective sigh as I turned in the drive and promptly realized the ice was concentrated on my driveway. Having turned in and not realized the top of my drive was icy, I had been relaxed and made the mistake of not coming in exactly straight. 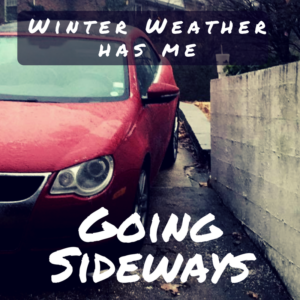 The rear end of the car skidded to the driver’s side, almost hitting the cinder block wall. Somehow I got the car stopped and I just sat there experiencing an adrenaline rush. I wasn’t sure whether the tire had hit the edging. I looked in the mirrors and couldn’t really tell.

I decided to turn the engine off and try to figure out my next move.

The driver’s door wasn’t going to be of much use. I cracked it and looked at the back tire. It hadn’t hit anything so that seemed good. I moved into the passenger’s seat and opened the door. I realized the front wheels were on textured concrete and the back tires were on ice.

This would take a little thinking to figure out.

I made sure I could get my footing, stood up and carefully went into the garage. Looking at the car, I decided I was lucky so far, but with more ice/snow coming and the temps dropping big time over night, I better figure out what to do ASAP.

First up, getting a bunch of ice melt around the tires and along the rest of the driveway. Then I took a photo to send to a few folks I trust for advice — my brother-in-law Jimmy who I frequently call in a pinch and a couple of farmer friends — Brian & Marie. Then I started looking for the cat litter I had just in case (allergic to cats so I certainly don’t need a litter box!)

The ice melt was definitely doing its thing, but I also noticed the stuff coming from the sky was now freezing as it hit. I decided to put litter around the tires too after letting the ice melt do its thing. I wanted the best possibility for getting my car down the rest of the drive without hitting the wall. Checking with advisors, we all agreed, I had things on the right path and needed to finish the job even though it may not seem easy. We all agreed that turning toward the wall on the right and staying in neutral sounded best.

I waited for the adrenaline to subside enough and took a deep breath, after I had wrangled my way back into the driver’s seat. I put the key in and took a deep breath as I turned it. Somehow, I got the tires perfectly turned and the car glided into the garage! I mean it is PERFECTLY parked and breathed a big sigh of relief as I turned off the engine and put the car in park!

Pretty sure I’ll stay put for a while now! And no doubt, I will be sure the drive is treated before I try to pull in on another day when it may get icy!