I have complained about the cold weather on several occasions and yes, I try to focus on the positive thinking about the fact that overwintering insects are meeting their frozen end, that I have friends helping me with tips on dealing with the cold and that if misery love company, I have one hell of a community this year! But when push comes to shove… I have an innate fear of walking on ice. 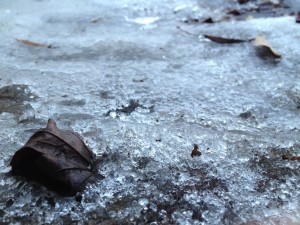 Seriously, even walking on thin ice gets to me. It has taken me a while to really pinpoint this. But I think I got it recently. Let me give you a bit more background.

Growing up in Memphis, we would see our share of freezing rain and sleet. We didn’t get as much hail or snow most years, but ice… that was something Memphis would get. In fact, while I was living in New York the Mid-South had a crippling ice storm (1994). Some folks were without power for weeks!

My parents taught us early that we could go out and play all day in snow, but ice was something you respected and stayed inside. Trees would break under the weight, live power lines would fall to the streets, etc. And the weather would clear soon enough warming up so we could be back out and about.

We would salt the walk and porch in order to get the newspaper & to let the mailman get to us, but we just didn’t go out on ice.

So all these years later, walking on ice is something that bothers me. (Please note — I am not blaming my parents for warping me in any way shape or form…. well not about the walking on ice anyway!)  I know it is just goofy but every time I step out and see ice… well I pause.

Sure, I’ve had my share of falls. My mom once broke her wrist slipping on ice. And I have never been someone who enjoyed putting on ice skates though I am slowly beginning to like watching hockey so maybe that counts as progress?

When I go to my car at times, the dreaded black ice is can seem almost paralyzing for a minute. And yet, I know you are much safer if you relax and just do it. All of this, by the way, is a source of never-ending entertainment for friends and I have to join them in the laughing! 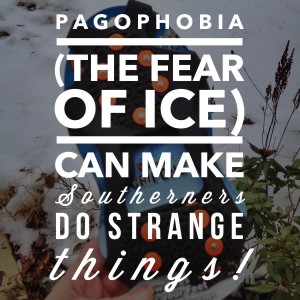 Probably the most entertaining thing though was when I followed someone’s advice and bought myself some little grippers that go on shoes to help you walk on slippery walks a bit easier. (Photo at left shows they have yet to be used two years after their purchase.)

This year has been a cold one. we have been melting and refreezing A LOT. That means walking on ice. As I watched friends & coworkers recently, I came to a realization. I just never developed the skill set of walking on ice like it’s no big deal! Despite dear friends posting about their love of ice fishing, I am pretty sure that is the worst idea EVER.

I told friends from the Midwest that I was sure it was a skill they developed as a kid…. sort of like riding a bike. I have a friend who didn’t learn to ride a bike until she was an adult. Even after a decade of loving her bike I doubt she can ride with no hands. She used to try to wave when someone would honk and the nervousness with which she’s do that… well, she would laugh along with whoever had honked.

So my fear of ice — severe fear of ice is called pagophobia — results in me wearing boots with lots of grip (Timberlands are my go to whereas Uggs are best for cold weather alone). Still, I walk a little bit like an old person afraid of breaking their hip. Yeah, I know I look goofy and I am working on it. Sadly this winter is giving me lots of refreezing parking lots and walkways to practice on. And now and then, a friend will coach me to just relax as they slide a bit while they walk. And I put out ice melt before the plumber comes even though he probably knows how to walk on ice.

I just wish this winter hadn’t given me so damned much reason to face my fear head on…. but it sorta seems I have to cause my lookinglikeatotalwimpaphobia is much stronger than my fear of walking on ice cause I do keep going… I just tend to slow down. 😉

0 shares
« Did you know Old McDonald was a really bad speller?
Have you heard it’s National FFA Week? »