This morning I was still waking up when I read a great blog post by my friend Colleen Newvine Tebeau (she was the one who encouraged my purchase of JZ, the deck rooster). She’s one of the friends in the New York area who were on my mind as I watched Hurricane Sandy. The crisis unfolded all around her and yet she was lucky not to suffer direct problems personally. Her blog post moved me to tears of absolute agreement this morning. Here’s the introduction, but you should go to her site and read the whole thing:

The “we” and “me” of Hurricane Sandy and beyond

The morning after Halloween, I was riding my bike through our Brooklyn neighborhood and all seemed normal.

A woman carrying a Starbucks coffee carried on a cellphone conversation about how many trick or treaters they’d gotten, a jogger wearing white earbuds and spandex dashed by, a dog walker dutifully scooped up poop.

And it all made me suddenly, intensely angry.

Though we can see New York Harbor from our corner, we were mercifully spared the wrath of Hurricane Sandy. Some trees were down, trash cans blown around, but otherwise, we were unscathed. 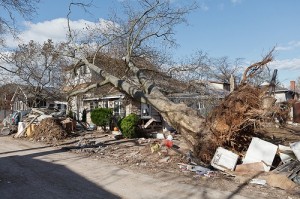 Colleen’s coworker John de Guzman went to Staten Island to volunteer after Sandy, and took photos of the destruction and clean up: http://www.flickr.com/photos/johndeguzman/sets/72157631930454817/

Just south of us, the Red Hook neighborhood where my husband has his art studio was not so lucky. Water rushed in, flooding basements, homes and businesses, leaving many people without power or heat, including the massive Red Hook Houses high-rise projects. (John’s studio was high and dry)

Many other areas were just as bad off, or worse. Gowanus, also adjacent to us, soaked in the rising water of a heavily polluted canal, and from Staten Island to New Jersey, the scenes of mangled, destroyed homes and piled up ruined belongings were heart breaking. In Breezy Point, a terrible combination of fire, high winds and flooded streets left a neighborhood that looks like a bomb was dropped.

As I came to understand the extent of Sandy’s destruction, it horrified me to see people who live a short walk from neighborhoods still bailing out water acting as if nothing was wrong.

I have never felt more like a New Yorker than I did that morning. My city — MY city — was hurting, and I had to do something.

I got on my bike in work clothes, took a few bags of cleaning supplies and headed to Red Hook.

via The “we” and “me” of Hurricane Sandy and beyond « Newvine Growing — exploring evolution, revolution and living life intentionally.

The reason her post moved me so much is I know exactly what she’s saying. She reminded me of things about Hurricane Katrina that I hadn’t thought about in years. It’s not like I can ever forget Katrina and I wrote about it briefly just a few months ago as Isaac set sights on New Orleans. But that post was about farming and dealing with some of the almost routine pieces of hurricanes and disasters on farms. The reason Colleen’s post grabbed my heart so much was it reminded me of the far more personal parts of dealing with Katrina. 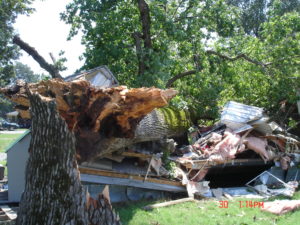 The wind from Katrina toppled several old trees in my town, including this one that destroyed a home.

When Katrina hit and days later when the levee broke flooding the city, I was safely more than 300 miles inland. A lot of people in the area had family in the New Orleans area and we also had evacuees take refuge in our area when it came to big storms. See, I was living in Benoit, MS and working in Scott, MS.

From my office, I could actually see the levee that protects the Mississippi Delta from the fury of the Mississippi River. The levee broke there in Scott in 1927 and was one of the most devastating events in U.S. history. I had been in the Delta close to a decade, hearing stories from a few people in the area who were still able to remember the levee break and we all studied the break. Hell, while I was living down there, New Orleans attorney John Barry made a New York Times best seller of the stories in his book Rising Tide. I had handed out untold copies of the book and had talked about the event in front of thousands of groups visiting the office.

It was abundantly clear to me and others in the Benoit/Scott area, we could easily be in the shoes of those on the Gulf Coast. And so many of us acted on that.

The day after Katrina left the Gulf Coast devastated, Delta and Pine rolled out a Katrina relief program to match funds that farmers donated to the Red Cross or Salvation Army. That program included an immediate check from the company and I understood that immediate funds were invaluable in getting things moving but the fact that money would continue to go in, was critical. The first week or so after the storm, my regular job was put on hold and I was able to help make a difference. It was an incredible feeling.

Gas stations quickly were running out of fuel when Katrina hit. But many farmers had diesel on their farms and I remember some of them taking the initiative to drive trailers filled with that diesel south to get it to people who couldn’t pump gas since there was no electricity.

Food and water were at a premium all along the Gulf Coast. A friend who did barbecues on weekends, took his cooker to the coast every weekend cooking hamburgers, hot dogs, etc and giving folks a break.

I remember crews of friends driving five hours in order to help home owners take their walls down to the studs, pulling out insulation before toxic mold formed.

A tiny personal part I played? Tracking down extended family members of a friend over seas. He had their home number and a cell phone number but that wasn’t much help in the response early on.  The couple were both doctors and we knew the kids were probably in college. I kept googling and making calls.

I found one of the kid’s academic adviser and she helped me connect with the family. All of them were fine. The parents were living in their offices at the hospital they worked at. Their beach front home was gone. And they weren’t sure how long they could stay at the hospital so they were focused on trying to find someplace to live when not working. The kids came home from college to help with that and sifting through the remains of the house looking for sentimentally irreplaceable photographs, etc.

That’s a stark reality shift. One day, you are a family of two doctors and kids living along the Gulf Coast and at college campuses and the next day you are living in your office trying to figure out the future.

But suddenly I was able to help them understand that relatives thousands of miles away were concerned and would be thrilled they were all safe and sound. In the conversation about housing, the possibility that they would need a better temporary home was mentioned. I was asked if I knew anything about RVs. I didn’t but I agreed to find out, so I studied up and then went to a dealership. I took detailed notes on different features, costs, etc. I was thrilled as the decision process went forward that a rental house was found!

What I did was really small, tiny even when you look at the big impacts of Hurricane Katrina. But I think all those tiny things helping in a recovery can make a wave of difference. That’s why I made another small donation to an organization I think is doing some good stuff in response. There are lots of groups active in the response and a friend who lives in the Bronx (Kitty Bradshaw) has a great list on places taking donations to use in response to Hurricane Sandy. Today I chose to support the efforts of the Jazz Foundation because I love what they are doing for those folks who have brought us music but may have trouble meeting their bills.