By this point, I think my family Thanksgivings have become legendary. My extended family gets together every other year and we go big — big fun is a key piece of it every time.

At the last one, we played our first games of human foosball and human hungry hungry hippos. And I have to tell you, the excitement made it hard for me to get video and photos just don’t suffice. I put a bit of it on Instagram, but this year I knew I had to make a point of capturing this so I could relive it. I also thought it would be fun to share.

And this also gives my family a way to share it too! 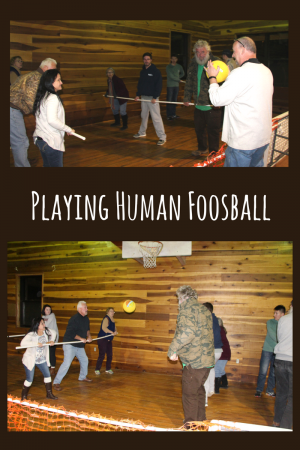 We had a large group so we counted off into four teams and had a tournament. Each team is six people and all get plenty of kicking time in. There also may be some fun messing with other players to be had.

Everyone touches the PVC pipe and you are supposed to keep your hands on it at all times. There is only to be side-to-side movement though it is hard to imagine nobody moving front or back in the slightest. If you want to try human foosball, we have learned a few things the hard way so I thought I’d share:

Do you want to see human hungry, hungry hippos?

0 shares
« Holiday Gifts Straight from the Farm!
Thinking Back to the Earliest Days of My Career & My Mentor »