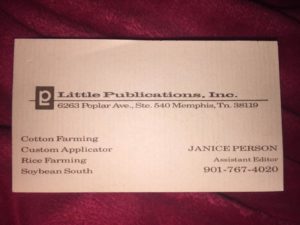 Seeing this business card recently while I was cleaning house, I was immediately compelled to write & share:

It has been slightly less than a million years since I handed anyone a business card with this logo on it. Yet, when I saw it in the corner of a drawer, I flashed back to the good old days (except their were times when oh Lordy I could have lost my mind)…. it was at Little Publications that I first was introduced to agriculture and farming.

Those were the days when a dear family friend found a way to hire me as his intern despite not having space or clear work for this journalism student who wasn’t sure what the world or future held for her. When I recorded every conversation with a story source so I could replay it to a colleague asking about things like impregnating fertilizer onto something or how you spelled TerraGator and whether I should know what that was.

That series of summer internships eventually became my first full-time job, the job I had when I first met Mr. Ray & Ms Dorothy. When August vacations by the president meant the rest of us would take a day to watch movies. When the copy machine was so horrible, we finally added a photo of the repair guy to the wall of employee photos in the conference room.

Hard not to stop immediately and share a little gratitude. May need to write those blog posts I have now got bouncing around my head cause the stories there were worthy of movie scripts… scripts that we never wrote but spent time contemplating which actors/actresses living and dead could play each of us.

It is hard to explain how much I learned on my first professional job…. and I have to admit, I’ve probably forgotten some of the life lessons that came with it. And I’m not sure it matters anyway. What does really matter, is how he invested in me. 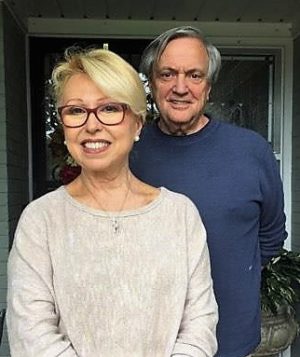 Adam Ballinger (that’s him and his lovely wife Maria this summer when I stopped to see them while traveling) was a friend of the family for as long as I could remember.

There was always something about them that stood out for me, even as a young girl. But once I was in college, studying journalism, he asked me about what I would do in the summer. I needed to make as much money as possible so when he offered me an internship, I jumped at it.

I wasn’t sure what internships were like, but I was the only intern in a small office and I wasn’t even sure what they did at his office. My eyes were on the resume development he promised.

Adam was the publisher of several farm magazines. He had also published a local home and garden magazine and more as well. I’m not too sure he needed an intern — there wasn’t even space for me so I usually worked in his office or a conference room nearby. He found ways to let me learn the entire business though — having each of the department leads put me to work now and then.

I put in hours upon hours looking at circulation lists. Finding and marking duplicates to remove from the distribution was mind-numbing and yet taught me to appreciate the details in a way I could never have expected.

The graphics person would get me to help now and then as she did paste-up. I still remember the first time I got to design an ad for a small company though I long ago forgot the company’s name.

The editor of a magazine that dealers would read, let me do a piece about something called impregnation. As a 20-year-old, I giggled awkwardly as I prepared for the calls and yet was a tad mortified thinking about me on the phone asking strangers about how they impregnate. I was a little sad and a bit relieved to learn that just meant putting fertilizer and a herbicide or something together. 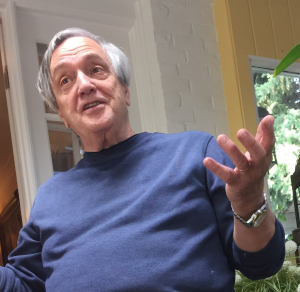 Somehow, Adam always had room for me at the office.

He would talk to me about what I was doing to help me really understand it. Help me see beyond what I was doing so I could develop the critical skill of anticipating what else needed to happen. With that on my side and his confidence, I had the ability to take chances.

I could take a chance to lead a project that had been the responsibility of someone with years more experience who decided to leave. And I knew that if I planned and executed things, I could earn the confidence of the client. In fact, I could do such a good job that we added additional publications to the company portfolio because a client wanted us to do something they had been doing in-house. That client is still someone I enjoy catching up with all these years later.

This was the job where I would take my first business trips. Where I would learn that I shouldn’t be judged simply on my age and that colleagues (though my parents age) were in so many ways people like me. They would help me stretch and do more in ways that built my foresight and initiative. We would play practical jokes together (mounting a photo of that copy repair guy among the rest of us on the conference room wall is a memory I truly cherish) and we each had a chance to be the one surprised in good humor. There were ongoing projects to cast movies choosing actors to play us and our colleagues.

There was an incredibly challenging time once when I saw something that another manager was doing that I felt was terribly unfair. I could hold my ground protecting myself and wouldn’t sell out a colleague. Neither of us did anything wrong but we were being accused of it. I didn’t need to ask Adam to back me up, I could handle it while he was traveling. Later when he found out, he said he wished he had known. I always knew I could go to him with it, but appreciated that he always had created an environment where I didn’t consider myself the college or grad school girl who needed others to stand up for her. That lesson has proved invaluable throughout my career. 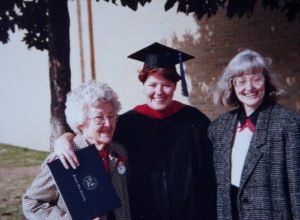 I received my master’s degree alongside all those years of experience (that’s me with my grandmom & mom who both attended the University of Memphis). That created a resume that neither Adam or I necessarily expected thought early on we both knew a resume build was important. As I walked the stage and picked up my diploma, there were quite a few options finding me. I still wonder if Adam and team were helping make that happen — and I chose to go to New York and work for a PR agency.

As I left Memphis, I packed a new briefcase that would draw eyes for the ages and the confidence that I had this well in hand.

Feeling Adam’s Impact on the Regular

It has been decades since I had that job, since I worked with Adam day-to-day, but the brainstorming and creative thinking environment he started me in still is a go to. Having fun at work — even going so far as to take a movie day — is something I relish! I hope to build that for others because years after Adam retired he is still having a very real impact on the world.

I’ve had other mentors throughout my career (Kevin was certainly one), but I think Adam’s imprint so early in my career set him apart.And each time we are in the same place, he offers stories that make me think and move my heart. I laugh a lot too! Even though we don’t catch up often, I immediately find myself thinking about the “what ifs” and the “maybe we coulds…” and what truly makes it powerful is how often I get on those paths solo!

Who are your mentors?