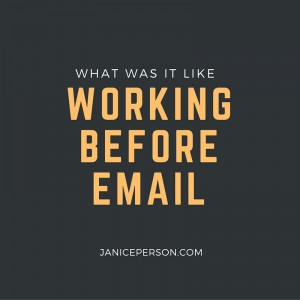 The question in the title of this post — How did you work before email? — is something that I was asked a few months ago. And the person asking it was genuinely confused by how communications work was done without email and all the digital tools we use on a daily basis. The honest question has stayed with me in part because I feel certain I didn’t give her question an honest answer.

In a world where most of us have email in our the at all times, there are lots of people in the workforce who can’t imagine how communications was done before. These folks were raised in a world where they used online resources to write papers for school, so saying you remember not having email is shocking.

Some Computers No Email

For me, my first communications job was while I was in college working as an intern at a company that published farm magazines. It’s hard to believe that I was hired as an intern without having a computer to use, but that’s what happened. And the conference room was my office unless someone else needed it, then I worked in their office.

At the time, several people in the office still had typewriters on their desks. At home, I had a small word processing unit so I could write papers but at the office, I was pen and ink. 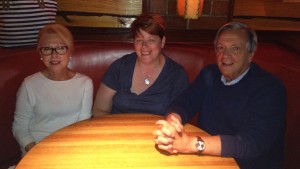 Now and then, I needed to type something up and I would sit in my boss’ office (fun visiting him this summer too!) while he was traveling or maybe he was on the phone or in a meeting… not necessarily my most productive job. One of the first jobs I had was checking circulation lists for duplicates. The sort of thing a simple Excel inquiry would do now! I sat there with massive printouts making myself go cross-eyed looking at those pages.

Sometimes, I even called farmers to ask if they wanted to receive the magazine. Those notes were made so the person doing data entry could code it.

I remember lots of faxes. The kind of faxes that would come out on thermal paper in a roll. This is how the magazines were laid out. No joke. We got the type that the printer set via fax into the columns. Then we would copy it cause the thermal paper would soon become too hard to read.

And I still remember the perfect travel itineraries Shirley would type up for us. By the time I was a permanent employee, I had my own office and computer! And then I went to work in New York.

But my first email address was through a bulletin board service through the National Cotton Council. I’d dial in directly to the Cotton Council…. ah those pre-internet days! There weren’t many others using email then but I remember how fun it was to find out my college painting prof had compuserve when he emailed me.

At that time, the company had an internal network and we could email each other, but we had just one computer connected to the internet and that was done by dialing into the network! Only one computer had a modem! And I still shudder when I think of that screeching sound!

Faxes were plain paper by then and we frequently used FedEx to send things overnight…. email wasn’t ubiquitous but it was coming at us fast and furious. 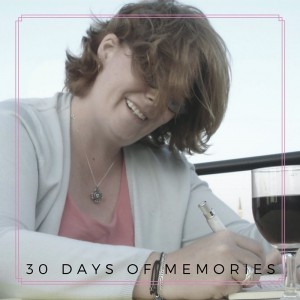 And I have to say that we spent a massive amount of time on the phone!

So, that’s how we used to work.

Hope you enjoyed this post… feel free to check out some of the other stories in the month of memories series of posts.

0 shares
« Memories of Antalya, Turkey Thanks to the G-20
A Heart-Stopping Midnight Visit to Denny’s »