For people who know me, it will come as no surprise. Having red hair HAD to be a part of my 30 days of thanks series! I mean, it is a huge part of who I am, it is something that has led me to stand out in the crowd, whether I wanted that or not but I’ll get to that later.

Recently, when I was at a science conference, I met another redhead who said less than two percent of Americans have natural red hair. That seems to be repeated on the internet so much but I couldn’t find any data sources. It seems to make sense that Ireland would indeed have a much higher percentage — some sources say even then it’s 10 percent.

Having grown up red, I have to say it was weird to go places where red hair REALLY made me stand out. The first country I went to where red hair was really unique was Japan when my sister was living there. But the one where I realized it was really a unique experience, was while visiting Kerala and a woman there kept asking my friend Geeta questions about me. It was all in malayalam so now and then Geeta would explain. The woman (pictured here) had never seen my hair color and was trying to put it into the neat buckets she knew as black, brown and yellow. She didn’t even know there was a red hair bucket! 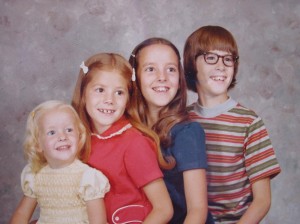 My parents ended up with kids on various parts of the hair color spectrum — I was the redhead but had brunette and blond siblings! When mom would have the four of us out somewhere, people would sometimes ask how she got so lucky to have such a mixture. She’d usually smile or something though I at least think there was once where she sarcastically said the mailman was involved. LOL! Like that was the kind of thing she would just confess to in the grocery! 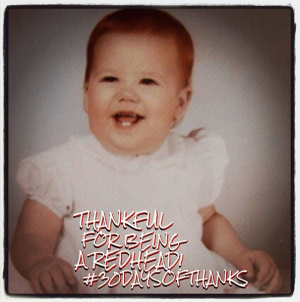 See, as a young kid, standing out in the crowd… that’s a two edge sword. That’s the way people bully you. Find something that others may not get and point that out saying something negative about it. Having red hair is an easy one for someone to pick out, just like race or a physical limitation is. I remember kids saying stupid stuff like “I’d rather be dead than red on the head.”

There were times when I’d beg to have a different hair color. Tired of the jokes and whatever. And at one point, I think I would say my hair is auburn… cause that was the way it was on my driver’s license and maybe it is technically auburn… who knows. The big bucket is red that covers oranges, auburns, etc.

Today, it has gone pop culture with South Park calling it gingervitis saying ginger kids have no souls or those with red hair without the white skin or freckles are day walkers. I don’t have freckles so I guess in Cartman’s world I’m not a ginger but a day walker. Of course it’s humor, but in the real world some kids still seem to pick it up. Luckily, more places are learning that it is still bullying and there’s a great video campaign against bullying red heads.

And I have to say, that my mom always told me people wouldn’t tease me if they didn’t like you or people only bully to feel better about themselves. It was still no fun to be picked on. While it seemed intense at the time, hindsight reminds me my mom was incredibly wise. And at the time, knowing there were some truly awesome folks who were redheads… well that gave me a sense of centering too.

The Benefits of Being a Redhead 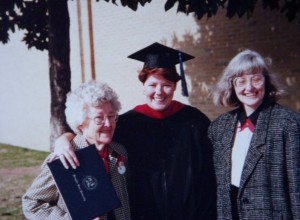 Even though there were drawbacks at a certain time in my life, being a redhead was also a positive in many ways. You are part of a minority that gets you and that others who appreciate diversity really enjoy. As a kid, I remember having people in my life who took a real interest in me in part because I was unique. I had the red hair they had or they would have liked to have or that someone they loved dearly had…. And in my family, that was a tie that only my grandmom and I shared. She had three kids and LOTS of grandkids, but there was only one redhead.

Thinking back to it now, I would have loved to see someone try to bully my grandmom late in life! She would have given them a serious chop! Not sure whether that strength of self came from her having red hair, but it sure didn’t hurt! And when I look at myself at times, I see some of that. Also see it in my mom who carried the redhead gene even if it wasn’t expressed visually!

Sure we have a few other red heads in the family. My cousin Lisa who has always been among the closest of family. She’s a ginger in the truest sense. Her hair is a brilliant orange, skin may even be whiter than mine and she’s got freckles. My first-born niece Georgia… She’s got rockin red hair too. Precious few freckles. We’ve celebrated our red hair so much that her son Jake made his Flat Stanley a redhead!

In college, I immediately shared all things redheaded with Kelly, who used to sit outside enthusiastically claiming she felt another freckle pop! Kelly and her husband Steve are living in Italy, brewing beer and raising happy gingers!

As I wrote this, I saw a BBC story on how many redheads there are in the world that gives this interesting fact.

“When humans moved out of Africa… skin lightened and people developed hair with different colours. There seems to be some advantage in having pale skin if you live in parts of the world where there isn’t much sunshine,” he says.

“The probable reason for that is that we make vitamin D in our skin. We rely on sunshine to make vitamin D and if you have very dark skin, it’s harder to make that vitamin D.”

Being pale, redheads are more efficient at making vitamin D and do not need so much sunlight in order to get the amount they need, he says.

via BBC News – How many redheads are there in the world?.

Besides that, for a redhead, all that comes with that — the hair, freckles (or none), light skin, the character-building taunts, the unabashed love — that’s a big part of how we become who we ultimately are. Being a redhead is a part of who I am, just like being Southern or from the family Person or  a music fan. It isn’t something I can imagine NOT being.

19 shares
« Thank God It’s Friday! That’s Certainly a True Feeling of Gratitude
Fresh Air on a Beautiful Day! Can I Get a Big THANK YOU! »

This blog is part of the communications efforts by JPlovesCOTTON LLC.
19 shares