I would love to pretend I always get things right. But sometimes, sometimes things just happen and I have to acknowledge that I have done something stupid. Recently I had a chance to soak up a lot of my stupidity and in the spirit of full disclosure, I realized later I needed to fess up.

Like I wrote the other day, I decided to stop alongside Interstate 55 when I was driving back from Memphis last week. I wanted to share a bit about how rain impacts cotton fields and the problems it can bring.

Well…. really wet turnrows can also bring problems to a well-intentioned person who doesn’t stop to think too! 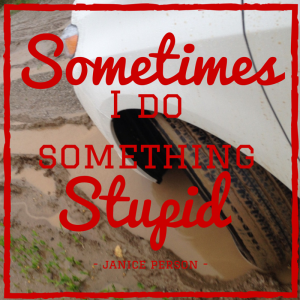 Yes, in case you haven’t guessed. Shortly after I finished the video I shot of cotton getting all soggy, I realized that the soft spot I hit when turning off the main road had gotten softer. But I’m getting ahead of myself.

See, I had stopped at a field I have stopped at before. It has quick interstate access and a really nice gravel turnrow. I’ve been on it several times.

When I stopped on Monday, I decided to pull off the main road because I’d seen an 18 wheeler coming through. I wanted to be safe but once I pulled in, I went further than I should have and that’s when I hit that soft spot I mentioned. I hopped out of the car, picked a boll and shot the video so I could get back on my way.

But that soft spot had gotten bigger and then I realized I would have to try to back out. That couldn’t be good. I soon realized that the front tire was spinning and I wasn’t going anywhere.

Then I decided to just gather myself. I got out to assess the situation and got a bit damper. But I was keeping my head.

Got back in and decided to go through the process again. Next thing I knew I was certain I was stuck. I tried calling my friend Allen but didn’t get an answer at the first number. I texted another friend admitting my stupidity in pulling so far into the turnrow and off the asphalt. She said things like that happened and wondered If I’d be able to find Allen or someone else nearby. I was sure something would work out.

It didn’t go as smoothly as I hoped. I called Allen’s mobile but crummy weather and Bluetooth combined to make that nearly impossible. I sat and relaxed a bit thinking through other options and looking at the puddle that was growing. Tried getting out of the mud again and then decided to call his wife’s mobile. Again trouble with reception so I sent a text explaining that I was in town and had done something stupid…. I was stuck and wondered who could help me get out.

A bit later, Allen called, we talked through where I was, what had happened and how stupid I felt, all the while he was telling me it probably wasn’t that bad while I was picturing a tractor pulling me out. We hung up with Allen saying he’d head over and me sitting there feeling ashamed I had gotten myself into such trouble.

He showed up and confirmed it was a neighbor’s field I was in. One of the guys from the gin (Mark) showed up too, he brought chains. They decided a tractor wasn’t needed. Probably a truck could handle things. After some looking around, Mark said he thought he may be able to drive it out if I didn’t mind him trying. And sure enough he did just that! Sure it took a little work and his experience driving on muddy soils in that area, etc. 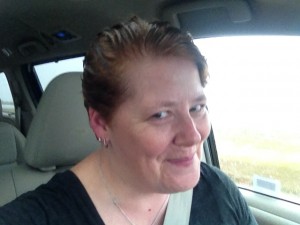 Sure I was soaked since I stood outside from the time Allen arrived, chatting about the crop and what all had been happening, etc. But I had a friend who was willing to put on a hat and rain jacket and help me out. So while pulling off the road that far was really stupid, at least I did it somewhere I people I could count on. So even though I did something stupid, the impact was fairly easy-going. With all of that going on, I had to smile even if I was soaked!

Now, I have to figure out how to show my absolute appreciation and I need to figure out how to replay a stranger for messing up the nice turnrow he had alongside his cotton field but ended up getting rutted up… but those things are relatively easy compared to getting a car out of the mud on my own…  I tried really hard on that and decided I should call in local experts! Of course, if you have some expertise on the other piece, I’m all ears! :