For at least half of my life, I have been a person with more than one place that I called home….. while it may seem weird to some people, to me, that is a great reason to be thankful! Not because it has meant spending half of my life away from the hometown for generations of my family, but as I mentioned in an earlier post, I am thankful for the ability to pursue the career I want without having to give up my family’s hometown of Memphis. 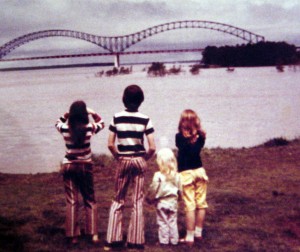 With generations of my family having been born and raised in Memphis, it is the place I have ALWAYS called home.

Here are five ways you can tell Memphis is my home:

Having a Second Home Becomes the Norm

I remember when I was in college, the first time I went back to Memphis for a summer…. there was this weird feeling of missing my college home. And yet, I knew I was at home. I felt like I was at home. And yet, I  was also missing home. That was when I first realized that I had been able to create a great sense of home hundreds of miles away from the only place I’d called home before.

It was a bit confusing and yet, for me made perfect sense. It still does as I’m writing this from my home in St. Louis and yet I miss my home in Memphis.

College was the easiest place to make a new home. When I moved back to Memphis from grad school, I already knew that it wouldn’t be the same again. But at the same time, it seemed to work for me to have two homes and so I was ready to move once I finished school.

Cultivating A Sense of Home

After moving several times to different cities, I learned how to cultivate a sense of home. With St. Louis, it certainly helped that I came up here to work for a week or so each month for several years. I had a chance to get to know the area, reconnect with college friends, follow local sports & events as well as become closer friends with several people at the office.

One of the things I learned along the way was that making another place home takes investing time to that objective. So for me, I wanted to be sure I met new people in St. Louis too. I started there and have built some great friendships here, have really gotten to know and love St. Louis. And I have found so many things that show it has become home.

Being able to create a sense of home somewhere other than where I grew up, where none of my family lives…. that takes several factors coming together. I’m thankful they have come together for me here in St Louis in a way that lets me appreciate my new home and old one too! Thankful for the friends who help me enjoy my new home!

0 shares
« Thankful for Funny Pictures & Movies — Oh, and Motivation from Office Space!
I Love Chocolate! Incredibly Thankful for It too! Gourmet to Mainstream! »