Most Sundays you can find me taking an hour out of my evening to talk with other bloggers during Twitter’s BlogChat. It is something that seems to elude many people…. why just talk with other bloggers? I have talked about the community several times previously — talking about the awesomeness of Blogchat founder Mack Collier, about things beginning bloggers may like to know and about capturing & organizing ideas for your blog.

Those are pretty broad things though and may not explain the concrete value the chat has so often. There are constantly things that I pick up from BlogChat that I have failed to offer up credit for here on the blog. (Though my tweeps see me raving about the awesomeness of my #Blogchat friends frequently  in my tweetstream!) So while I have a very clear example of a benefit of participating in #blogchat, I thought I’d write something up.

The Benefit of BlogChat Open Mic

I have to confess…. I have been having some issues with blog load time & short outages in the past month or two. Not huge issues which took my site down and made it offline for hours, but there were hiccups here and there. I kept thinking I’d get to it but it has been dragging on. And I think the drag has actually been going on for a lot longer but the symptoms got big enough that they were obvious to me.

I wanted to track it so I set up Pingdom notifications.  That’s when I realized I was really having problems. I started getting notices fairly frequently saying my blog was offline for a few minutes here and there, but it would go back up quickly too. I talked with the host and they ran some tests on the server. They had me check some things too. I ran several other tools that help rate what your problems may be and came up fairly empty but uninstalled a couple of plugins that I wasn’t using just to be safe. I was ready to hire someone and pay them almost anything to get rid of the problem! But I had one more possibility ahead of me…. #blogchat’s open mic! 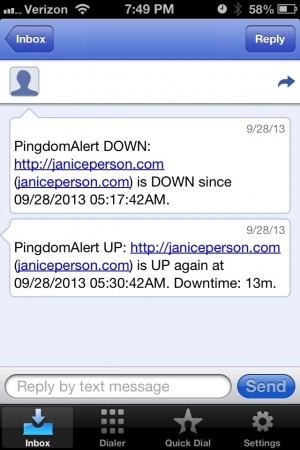 I have to ask, would you worry if your site went down for 13 minutes at 5 in the morning? Not exactly high traffic time, but it is a symptom of other problems.

During last week’s open mic at #BlogChat I asked if people had ideas on what else I should try. Admitting I had reached the end of my rope, I think my tweets sounded sort of pitiful because I had several people asking various questions to help diagnose what could be the problem. In the end, I had a WP expert DMing me trying to get to the root of it. She had me provide her some info (cautioning me on the way to be sure I maintained privacy of key settings) and next thing I knew, I stopped getting notices from Pingdom about outages. Seriously. I mean here’s the photo of the last pingdom notification.

What was dragging my site down? A caching plugin that is frequently the answer to problems others are having. How funny is that? Something that is designed to make your site run faster was having the opposite effect on my blog and none of the tools I was using could figure it out. But a friend who blogs put me in touch with her WP genius (Angelique Weger @miscellaneaarts who is creating a self-titled website at angeliqueweger.com) who talked me through what all had been happening and finally suggested I try removing the caching plug-in to see if that helped. And BOOM! In just a few tweets and short emails, my problem was identified!

There have been dozens of those things happen with tweets sent during #blogchat over the years and countless tips offered that I didn’t even know to look for!  I have written specifically about Mack Collier (@MackCollier), the genius behind #BlogChat, but I thought you might like to know some of the other giving members of the community. So here’s my list of “go to” blogchatters — the people who consistently bring good information to #blogchat, the folks I regularly learn from…. these are awesome members of the #blogchat community!

Who are your go to blogging experts?

0 shares
« Day 4 Part 2: Touring Yellowstone National Park (Video)
Thoughts on How I Want to Tell My Story Even if the Prompt Isn’t Ideal »