It’s been a busy week! Need to do better on sharing posts cause I have so many things I want to share from my great American roadtrip. And to think we only got the half of day 4 — me checking out the area before and in Grand Teton National Park, The second half of the day was just as awesome! It was my first visit to Yellowstone National Park and I now know I need to make some return trips! (Please note that I was in the parks on Labor Day, before the national parks & their websites were taken down by idiot politicians & bureaucrats from both parties.) 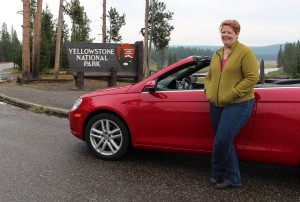 As I drove north, I decided it was time to put the top down for a little bit. Sure I had to wear the polar-tech to keep the weather wimp in me in check. 🙂  But it was in my mind that the top would be down everyday on the roadtrip….. just something about that Wyoming fresh air made me crave top down conditions! It was nice of the weather gods to give me that for a little bit. Sadly though, shortly after I entered Yellowstone, rain came and it had to go back up.

Entering the gate, I simply needed to show the ranger the receipt from Grand Teton as the parks are joined. I had already put the top up but the cute ranger said he loved my red zippy car. I told him it looked even better with the top down but the rain forced me to put it back up. He just smiled.

I had noticed in by the time I got to the Nebraska State Fair that there weren’t many convertibles on the roads any more. Probably noticed that around the same time I noticed how they have so many things geared for closing roads! Maybe there is a correlation or causation… but it was enough that by the time I was doing my long drive in Wyoming, I realized I was now counting convertibles. I told Brian that I wondered whether I would see even half a dozen while there. Since I was driving around 700 miles, that would average a convertible every 100 miles or so. I got to my goal, but barely! And I’m not sure any of the others were red so I did stand out! 🙂

One of the last overlooks I stopped at in Grand Teton had information about forest fires on the signs. 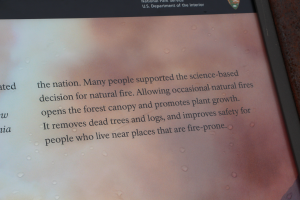 Yes, you can see that the text on the sign really grabbed my eye enough that I took a close up of one area to be sure I remembered it. “Many people supported the science-based decision for natural fire. Allowing occasional natural fires opens the forest canopy and promotes plant growth. It removes dead trees and logs and improves safety for the people who live near places that are fire-prone.” 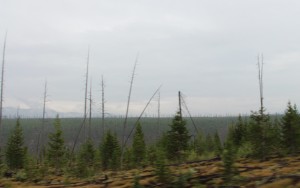 Granted, forest fires in Yosemite had been getting a lot of attention and I had seen a lot of smoke the day before that made me wonder. But having markers there just before I drove through an area… for me, a visual thinker, I was taking in the terrain as I drove and stopped to take it in a bit more. The photos aren’t that great (the weather was dreary just like the idea of a forest fire is) but you could see how barren the area had become years ago, with virtually no big trees. But you could also see how it was replenishing itself. Very cool.

As I got into an area where the forest increased in density, I was really enjoying the scenery. I also enjoyed the fact the weather was getting better. 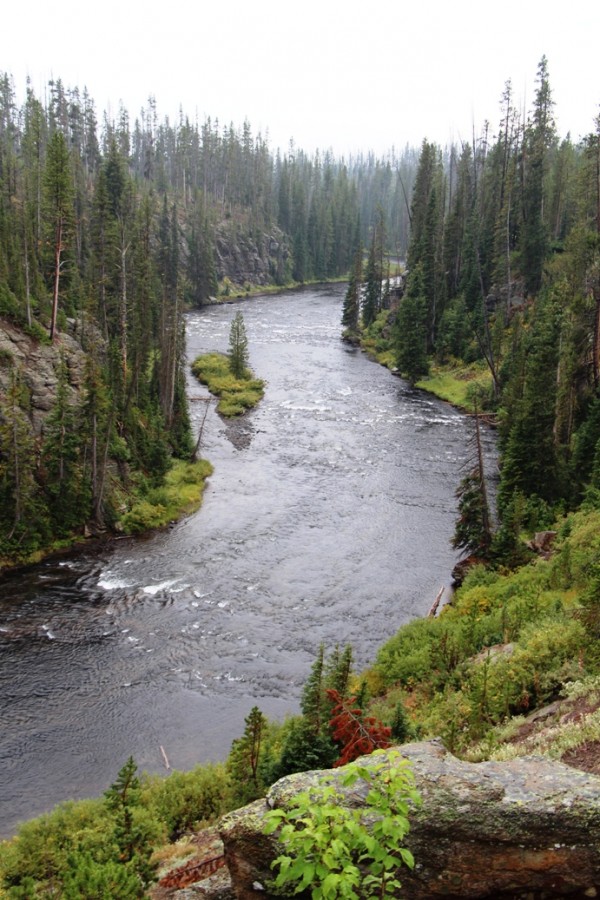 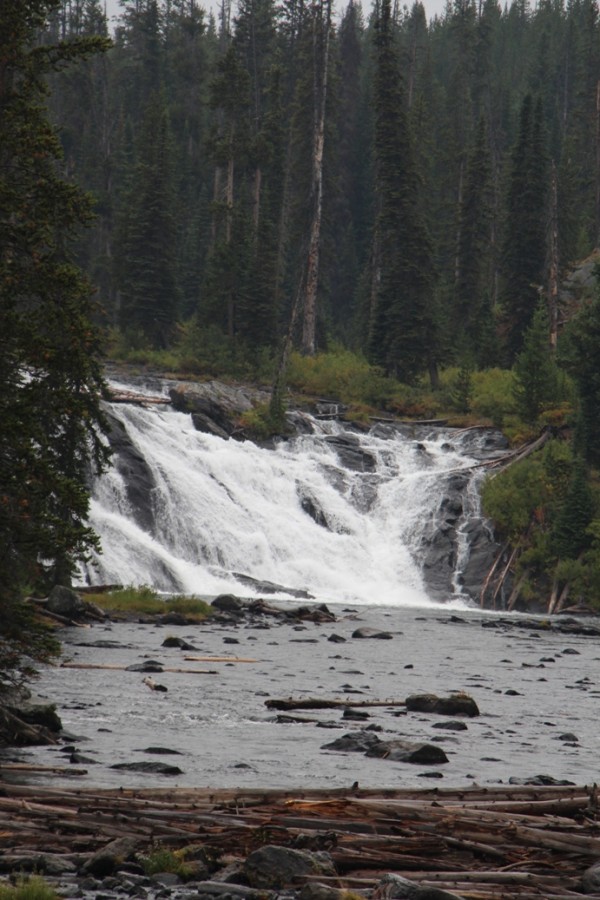 Yes, it is stunning to drive through…. breathtaking to stop and soak it up some more!

Driving through and soaking up the beauty of Yellowstone, was fantastic but at a certain point, I wondered if I should try to focus my time instead of keep doing the opportunistic stops. Stopping for the welcome center gave me a chance to get an expert’s opinion. And it also solidified my conviction that the rangers in theses parks are awesome as I asked one about the sights ahead, priorities I should set, anticipated drive time, etc.
The timing for Old Faithful’s anticipated blast of the afternoon had us thinking if I went there directly, I may get lucky and catch it but traffic may make that hard. He recommended I accept I may miss it but if the road was clear, I could get a win. And he focused me on a couple of other things too that would allow me to see things and get out of the park safely by dark. Later I realized this was a really valuable conversation! 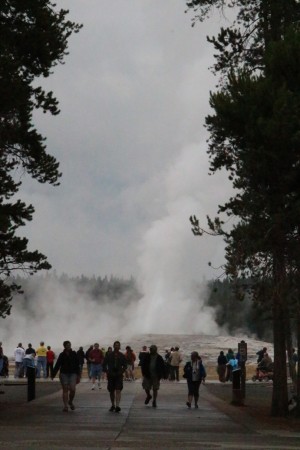 I saw Old Faithful blowing from the car as I was pulling into the area. It was impressive. Sure, I wish I would have been standing right there at it, but I had already had such a beautiful day in the parks, that I really couldn’t complain! I was still reeling from the chance to see that moose so closeup. So for me, seeing Old Faithful from a distance in the one afternoon I had in the park was enough.

The weather finally was clearing and I had to take the opportunity to enjoy the fresh air again! Besides, it was awesome to be able to really soak up the quiet! Just the wind and an occasional car. But when I saw this, I came to another unplanned stop! 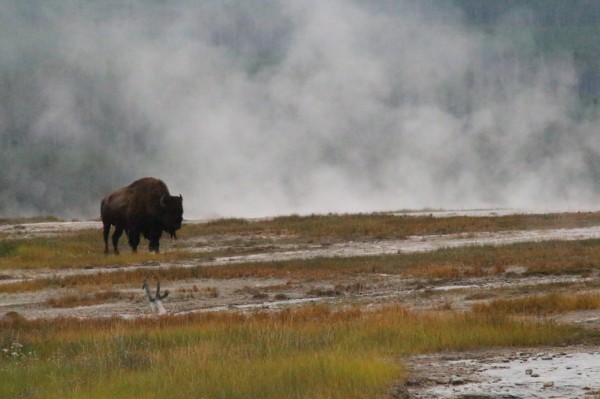 It was so beautiful, I simply had to sit and soak it up. Lots of photos and video taken here! For me it seems like an image from another time! And although I am very familiar with buffalo, this view was iconic, mesmerizing even. At a certain point, I realized I better move on though as I was cutting down on the number of other sites I could visit. My next stop was really close.

The different types of sights in Yellowstone is amazing and although I had heard of some of them like Old Faithful, I hadn’t heard of the Grand Prismatic Spring. Wow. The colors were so vastly different! I can only imagine what it would be like on a sunshiny day! In case you are like me and haven’t heard of the grand prismatic spring, let me start there. 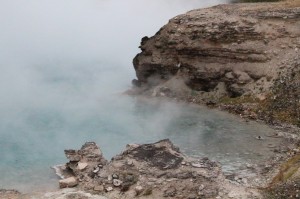 Alongside the geysers of Yellowstone, there are other thermal features including the park’s largest hot spring — that’s Grand Prismatic Spring. The description in the parks section of MapQuest says:

Located in the Midway Geyser Basin, the spring is 370 feet in diameter and 121 feet deep. In addition to being the largest thermal feature in the park, the Grand Prismatic Spring was also the first thermal to be definitively identified (by a white explorer). An 1839 diary entry by a fur trapper named Osborne Russell describes a “boiling lake” of deep indigo blue about 300 feet in diameter.

This hot spring has a few pools, and a boardwalk allows you to walk through the area safely and gets you pretty close to the excitement too! The “boiling lake” was interesting and seemed to be a combination of a hot spring with a geyser going off in it! The look was really ominous and beautiful both at the same time!  And the colors were surreal! 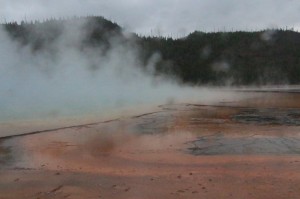 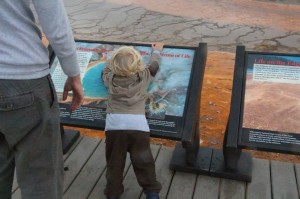 Several turns and twists on the drive and several very different sunsets. These photos are definitely worth a thousand words though they are silencing too! 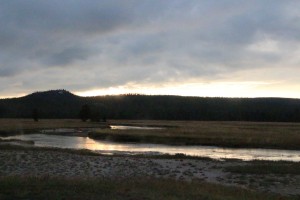 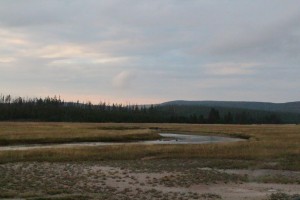 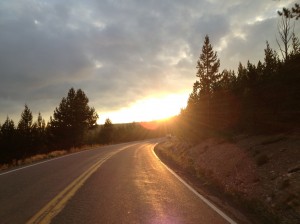 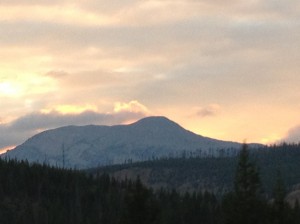 One of the very last places for me to stop was an area where I saw a lot of cars on the turn out and a lot of people looking across the road. I wasn’t sure what everyone was looking at, but I was dang sure stopping! Come to find out, it was a herd of elk moving around at Mammoth Falls. Most were young without the familiar antlers. But the area really was beautiful and it was so peaceful. Also, I knew the gate wasn’t far and I was thinking I’d have enough time at dusk to get out of the park. 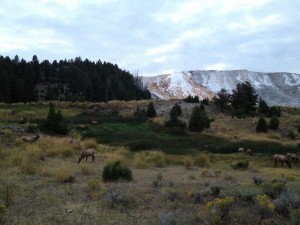 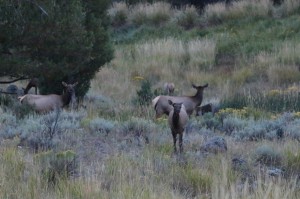 Video of the Full Day in Grand Teton & Yellowstone

0 shares
« Day 4 Part 1: Getting to and Touring Grand Teton National Park (Video)
An Example of the Benefit from #BlogChat & Go To List of BlogChatters »