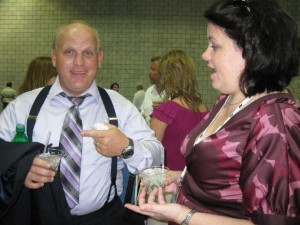 Some times you have to stop and think about the way the world works. There are lots of great people out there who have crummy stuff happen to them. They can be next door or across the country, and while we frequently feel helpless, there are times when there is a glimmer of hope. You wonder at times whether you should take a chance…. maybe it would just get hopes up and maybe you can make all the difference. Weighing those decisions, I always end up focusing on people rather than things and usually offer a hand as I hope others would do for me. But can you use that impulse in a social media environment?

A few weeks ago, Dana & Wilson Judice wrote a post on their blog Hey Hungry People that spoke to the power of social media. The post — How Social Media (especially Twitter) is Saving My Farm — took me by surprise and left me humbled and proud. At the time, I shared it on my Facebook page saying:

I frequently have people wonder about whether social networking is worth it. Well, I’ve said yes time and time again but today, this blog post has brought me to absolute happy tears. Wow. What a Day.

When you read the post, which I hope you do now if you haven’t previously, you see I really didn’t do much. I met some folks online, became friends with them, met them at an ag meeting and when I realized I could lend a hand some way, I did. My mom, uncle and a high school friend as well as a colleague all said they weren’t surprised. Seems its assumed good people do good things and they were all nice enough to suggest that meant I was expected to do good. The fact it was with people I had gotten to know almost only through social media, didn’t seem to surprise people. And that surprised me a little bit.

Medical Mysteries Over the Miles

Tonight as I checked in on social media, I saw my friend Val Wagner was giving an update on her youngest son, who’s had a number of mysterious health challenges that I began following long before I actually met Val. I remember seeing these tweets about his health and thinking about how hard it must be to have no idea what was wrong. Trip after trip, driving hundreds of miles to the best hospital…. hour after hour of seeing him suffer and talking to doctors who couldn’t figure out what was happening. It was beyond heart-wrenching.

One night, Val was struggling with the question of whether or not she should change direction with the doctors she had. We had talked a few times on Twitter, but I don’t think either of us really knew the other very well. But I had to say I could have a friend give her his thoughts since her son was at Mayo and my friend did a residency there. That phone call helped her have an objective third party, someone who would be equally as worried if he was making medical decisions for his kids. 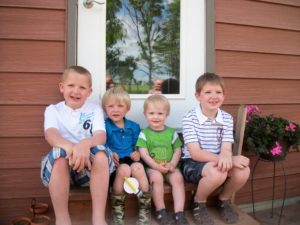 When I finally met Val a couple of months later, she sat down at the table with me at the AgChat Foundation’s first training conference. I was talking to people about blogging. A few folks had specific questions, Val’s questions were much bigger and seemed to indicate she didn’t think sharing her family’s story was important. I remember pointing out that I had been following her story and her son’s for months and that, with the other three sons and all the farm adventures made her the perfect person to blog!

I’m pretty sure she wanted to get away from it, but the poor girl was at the same gate area as me the next day as we all headed home. I was a bit pushy. But once Val decided to blog, she jumped in with both feet…. and frequently the eight feet that come with the Wagner boys! She’s done incredible things for agriculture in the time she has been blogging, but tonight I saw that it was also really paying off for her too. Seems some people who can make a difference for her little one have gotten wind of her story and they want to help. Val tweeted: 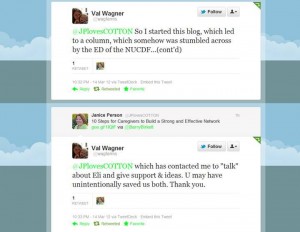 After I posted this story, Val posted about The Blessings of Social Media. Wasted time is what people think? Hmm…

Moral of the Story?

So how can you and other good people make a difference through social media? Be yourself and lend a hand when you can. That’s worked for me and by doing what felt like tiny things, I’ve been able to make real differences for a few fantastic people. That makes me smile humbly and makes me think my mom will be proud…. that makes today a really good day!