On my way to Miami for work — BlogHer Food which is going to be an absolute pleasure I am sure — I sat next to a lady who was rolling with a lot of punches this week. When I heard about some of the things she’s been through, I said “you really should blog that!” She said she didn’t have a blog but if I did I was welcome to. I thought there is no way I would do that, but here we are circling Miami rather than getting in the cab lane and I have to wonder aloud when the poor thing’s jinx will wear off!

Let me start at my beginning while I wonder if I will land in Miami or be diverted to Fort Myers.

Not My Best Day or Two

I originally took this week as vacation to spend time in Memphis with family. Somewhere along the line I decided that it was important for me to make this business trip and there have been little kinks along the way for me. Yesterday as I sat at my mom’s doing a bunch of emails I thought to myself (and verbalized to my mom) that I had really had enough of yesterday.

I spent too much of my day unproductively. I took guests to two restaurants that weren’t open for lunch before landing on the third which would soon be closing and we realized we were up on the end of school for my niece. It was not a day where I felt myself. And I had trouble finding a positive outlook for a while.

Today, breakfast plans got cancelled and the flight to Miami was delayed a bit. I wondered what sort of vortex I was traveling in. What type of jinxs I triggered. That was until halfway through my flight when the lady next to me spilled her Coke on her lap and I asked her if she was headed to Miami or connecting. That’s when perspective entered my world in newfound ways. 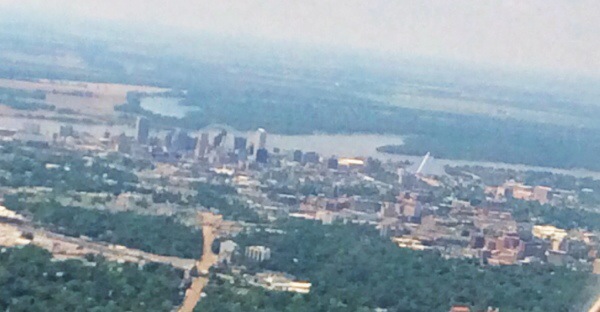 She’s on her way to Italy for a tour. It is her first trip out of the U.S. She booked this tour a long-time ago and has been anxiously awaiting it but said the trip seems to be eating up all of her bad travel mojo ever.

She was supposed to have arrived in Naples on Tuesday. Yes, you heard me right TUESDAY! And here it is Thursday!

The series of events that have unfolded are something I couldn’t even begin to imagine.

Her first flight was one she sat on for quite a while as it was delayed for weather. Eventually they needed to go back to the airport for more fuel. Ultimately it was cancelled for a fire in O’Hare’s flight tower. Seriously. Baggage handlers were suddenly behind the counter alongside a ticket agent who was at the end of her shift on her first day back after surgery. Then my fellow passenger was supposed to fly out and there was another issue. That left her on this flight for Thursday.

There were international travelers going to funerals, people who don’t speak much English, and more…. she was simply happy to be able to go home rather than stay in hotels somewhere.

I’m thinking the fact that she can continue to laugh at the absurdity of the series of things that have happened and focus on the fact she will finally get to Rome, hopefully catch the group on the Amalfi Coast for a day or so, etc.

As she told me her story, I realized that like me she realized other folks had it worse than her. In fact, some from the tour were still in Memphis. She napped a bit and didn’t seem to notice the announcement about the potential rerouting. I couldn’t imagine waking her over it.

Once she was awake, I mentioned that I had started writing and she filled in some details here and there. As we landed she grabbed her camera wanting to snap a photo of the palm trees. Afterall, she missed her chance earlier to get a photo showing Memphis was finally in the rearview mirror so to speak. I had hastily snapped one across the aisle but have to admit it wasn’t awesome. However, it did catch the moment.

Upon landing, she stepped aside to get the bag they valet checked. I wondered with the weather delays in Miami weather she would be making the connection but she simply smiled and said “If I don’t see you again, I hope you have a good trip.”

I hope she’s landing in Rome soon and that the rest of the trip is stellar!