I had been sure that H would be for The Hill, St. Louis’ Italian section of town. It is awesome and will certainly be covered here, but I decided to put a different H at the start of this list. H is for hockey.

It may seem weird that I’d feature hockey. Afterall. I have ranted about how St. Louis is a baseball town several times before — the city unites behind the Cardinals and the whole town shut down for Stan Musial’s funeral. But hockey really stands out in St. Louis for me.

Having grown up down south, hockey wasn’t something I really ever watched. Sure, I saw some of the big Olympic matchups but hockey wasn’t a regular part of things. When I moved to New York, granted I knew some diehard hockey fans (Rangers & Devils stand out), but the sport was seen as a bit…. hmmmm how can I say it…. in your face. But St. Louis has shifted my thinking and now I’m a hockey fan! What changed?

Part of what really has changed the way I see hockey is probably the fact there is a regular presence of it. In St. Louis, there isn’t just one source of hockey excitement. My good friend Kelly is a hockey mom… she is pumped about hockey for months on end! I hear about high school games, college teams and after a while, that sort of thing makes you wonder what you are missing!

I’ve had the chance to go to several St. Louis Blues games and granted, my first hockey game here was in a suite where the dessert cart made a visit and I had to admit, that wins me over! But last year is when I really found myself asking more questions and getting more answers about hockey. 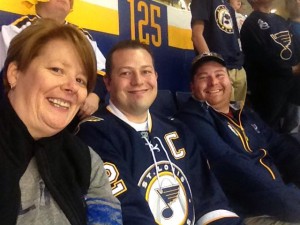 The Blues are a really good hockey team. I had the chance to go to a playoff game with some fellow agnerds (ie people like me who love agriculture and social media). Like previous hockey games I had gone to, I was watching and wondering. And for me when I start wondering things I ask questions, luckily Josh & Thomas was willing to help explain what I was looking at and as I understood a bit more, I really enjoyed it.

I’ve found that is pretty common among the hockey peeps here. Folks are willing to help you understand some of the things that are happening. How teams strategize and operationalize to find their way to a win, etc.

I watched several of the Olympic hockey matches this year and think it solidified an interest in the sport. Hockey games were fairly well covered on TV with early morning matchups being the talk of the office. There were three St Louis Blues players on the U.S. team — David Backus, Kevin Shattenkirk and TJ Oshie who became a national hero of sorts for his performance in a shootout against the Russian national team. That really lit the city of St. Louis up!

St. Louis has a neighborhood called The Hill that reminds me in bits and pieces of neighborhoods in New York I enjoyed so much because it is home to a strong Italian community. The neighborhood is home to some great events and businesses, here are just a few you should take note of:

As I mentioned on the Forest Park post, St. Louis is home to the Missouri History Museum and is currently celebrating St. Louis’ 250th birthday.

The Hi-Pointe Theater is on my to do list. I’ve been to lots of historic theaters, but there are all built for live performances. This one was built to show movies and still does! It’s at a crazy intersection in St. Louis where streets come from seemingly every angle and features a massively large Amoco sign. I need to get out and walk around the neighborhood some!

Another restaurant for me to check out is Hodak’s Fried Chicken!

The A to Z series about St. Louis is slowly getting back on track! I’m will considering topics for the upcoming letters and would love to know if you think I missed something! The rest of my St. Louis A to Z is posted here and I’d love for you to check out last year’s A to Z of Agriculture — H was for hay!