I know. Sumo wrestling is something very few Americans think the idea is something they really want to see. The image we have doesn’t really lend itself to understanding the sport. Hell, we have bars that have sumo suits where we play like we know what we are doing in a blow up suit. But this spring as I began planning a trip to Japan, I started looking for a sumo tournament.

And I have to admit here and now, I kept putting off doing this post because there is so much to say. So I apologize that this will be a lot longer than most of my posts. hopefully if it is too long, you can scan through the headings for what interests you most. 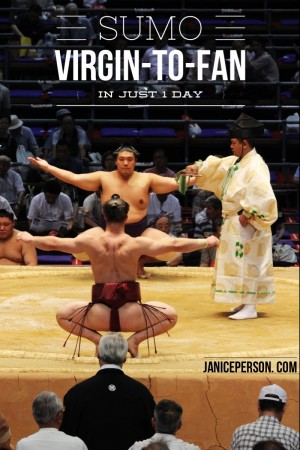 Growing up, I’d regularly see the World Wide of Sports on Sunday but I can’t remember seeing sumo wrestling. The sport is deeply ingrained in Japanese culture and yet, in the U.S. it is hard to remember there is even such a sport. With Japanese family members, I kept wondering what it was about.

See sumo wrestling is the national sport in Japan. It got started in ancient times, much like the Olympics did. Sumo is a combination of sports and religious ritual. That’s why the ceremonial part of sumo is so important to observe. In case you missed my post on sumo ceremonies, you’ll enjoy the video & info.

And since I have Japanese family members, it seemed like something I should try to understand. But sumo tournaments aren’t like baseball games… there aren’t that many opportunities. In fact, there are just half a dozen tournaments each year, each having all day matches for 15 days. Somehow, we got lucky and the Nagoya tournament was being held while we’d be there so we made plans to go!

Tips on Attending a Sumo Tournament

There were several things that worked for us or that we noticed by being at the tournament for the day that I think I will share for the onset of this post.

Wrestlers do a round of stretches first and what’s interesting to the way a match starts, is at least from everything I saw, it is up to the two wrestlers to decide when they are both ready to go. The stretches, the mental process of preparing, etc are done simultaneously. 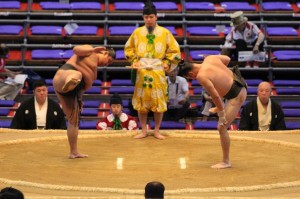 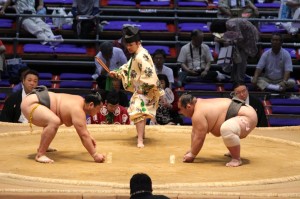 There is a referee in the ring (changes frequently and wear some wild outfits) and judges on each side of the ring too (much more conservatively outfitted). They are there to be sure they understand the results but otherwise it seems the wrestlers wrestle and referees don’t interfere. In the course of an 8-hour tournament of matches, wrestlers were busy getting their heads in the matches but never at the expense of others. How could I not like a sport that embraces such an empowering mindset?!?!

The Rules of Sumo

The rules of sumo are pretty simple. There are two ways a match ends: 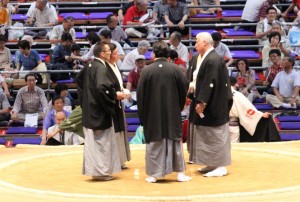 You can see both step out or put a hand or knee down, but one wrestler always does it first and with a set of judges all around the ring, most decisions are made quickly and easily. However, we did see a couple of matches where the judges would gather. Other than those rules, I think respect and reference are likely the only framework in which the wrestlers work. 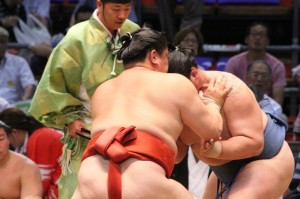 The stereotype of sumo wrestlers are they are fat guys. I have to admit that many of the wrestlers we saw definitely have some pounds that aren’t muscle. Sure I had heard they are a lot of muscle, but having only seen a few photos of sumo wrestlers, muscle hadn’t necessarily stood out.

Looking at theses guys in the ring as they prepare for a match, you can’t help but notice the calf muscles they have. Serious calf muscles and quadriceps too. The upper bodies vary widely but leg muscles, that looked like a requirement.

I didn’t realize that there were no weight classes in sumo wrestling though. This is really different than the wrestling I watched my nephew take in. Since he is really thin, I was always glad that he would be facing competitors that were similar in size. But check out this group of sumo wrestlers.

Pretty sure you can guess who my nephew and I had to cheer for! Yep, we were screaming for the skinny sumo wrestler — his wrestling name is Takanoyama and he is from the Czech Republic. 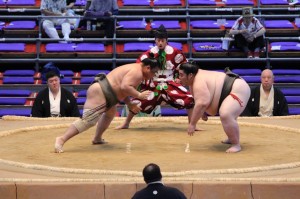 You have to wonder what sort of strategies sumo wrestlers employ and when you watch hours of matches, you start to see that there are several different ways to go.

I saw several matches where one of the wrestlers got off to a really fast start, lurching toward the other and pushing with all their might immediately with the match’s start. The guy in the photo at right did just that and used the momentum he was able to gain and the strength of his calf muscles to push his opponent backward. I’m thinking that works with some opponents but not others. On that day the aggressor on the left pushed the wrestler out of the ring to the right.

The way sumos push each other, you can sometimes use a persons girth or momentum against them. Or you can simply get someone so off balance, they end up falling or putting a hand or knee down. So it seems to me that one of the greatest things a sumo going for himself is an ability to maintain his balance. So being able to maintain his balance while getting your opponent off balance, is one strategy to take.

We didn’t get good video of it but someone else who was attending did. You can watch the match and see the skinny sumo beat a bigger guy. 🙂

Here are a couple of the matches Kazu and I watched…. You may enjoy taking a look. And if you are thinking about taking a trip to Japan, I HIGHLY recommend you check the sumo tournament schedule and get yourself some tickets!

Although I feel like I have written too long a post, I also wonder what I forgot to mention. If you have questions about sumo wrestling, please ask away and I’ll see if I have an answer! If not, I will try to find it!