Wow. I’m already having a really tough time picking out which word to go with even though I limited myself to agricultural words. The leading candidates for today were: 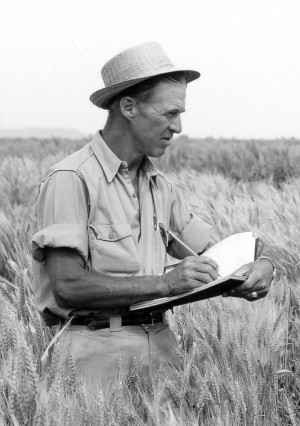 But I decided I had to go with Borlaug. Norman Borlaug to be exact though in agricultural circles we rarely feel the need to explain more. It’s a name that many don’t know but there are many who hold high in the highest regard.

Ninety nine years ago, Norman Borlaug was born into a farm family in Cresco, Iowa which is in the northeast part of the state. His family grew a variety of crops and livestock and he always credited his farm background with his work ethic. He studied forestry and plant pathology doing work in a number of spots including the US Forest Service before finding his spot in the world where he could really make the difference that would propel him to the world stage.

He is credited with major accomplishments and the basic bio of Borlaug says:

In 1944, Dr. Borlaug participated in the Rockefeller Foundation’s pioneering technical assistance program in Mexico, where he was a research scientist in charge of wheat improvement. For the next sixteen years, he worked to solve a series of wheat production problems that were limiting wheat cultivation in Mexico and to help train a whole generation of young Mexican scientists.

The work in Mexico not only had a profound impact on Dr. Borlaug’s life and philosophy of agriculture research and development, but also on agricultural production, first in Mexico and later in many parts of the world.

It was on the research stations and farmers’ fields of Mexico that Dr. Borlaug developed successive generations of wheat varieties with broad and stable disease resistance, broad adaptation to growing conditions across many degrees of latitude, and with exceedingly high yield potential.

These new wheat varieties and improved crop management practices transformed agricultural production in Mexico during the 1940’s and 1950’s and later in Asia and Latin America, sparking what today is known as the “Green Revolution.” Because of his achievements to prevent hunger, famine and misery around the world, it is said that Dr. Borlaug has “saved more lives than any other person who has ever lived.”

Those things are all reasons Dr. Norman Borlaug was awarded the Nobel Peace Prize in 1970. Its also why Penn Jillette of Penn & Teller is pumped when playing a card game about the greatest person who has ever lived holds with one card. He did great things for parts of the world that wanted to find a way to feed their people…. now that is awesome!

Tomorrow (Wednesday) is the day for the letter “C” so what do you think the word of the day should be?

0 shares
« How Do You Make Your Blog Better? Time, Effort & Shared Expertise
D is for Debt (Farm Debt) — an A to Z Series about Agriculture »